Teased earlier this month, the low resolution images somehow obtained by autoindustriya.com shows Mitsubishi’s rival for the Toyota Fortuner, Ford Everest and Isuzu MU-X brandishing the Dynamic Shield face like on the Triton, Eclipse Cross, ASX and the South-East Asian market Xpander MPV. While the model in question appears to be a top-spec version, the […] While the model in question appears to be a top-spec version, the Sport’s adopting of the Dynamic Shield exterior sees it receiving a chunkier front bumper, thinner headlights with integrated LEDs, a chrome two-bar grille, wider lower air intake, prominent fog light clusters and a silver front skidplate. At the rear, the controversial vertical taillights remain, albeit now with a blacked-out appearance and newly designed clusters, while the bumper has been restyled and a spoiler integrated into the bootlid.

Having benefitted from a subtle revision in September last year, the Sport’s interior appears unchanged with the seven-inch touchscreen infotainment system dominating the facia and not much else being known. 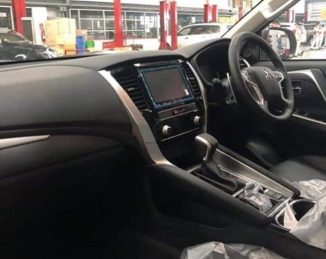 Expect the turbodiesel engine to also be unchanged and continue to displace 2.4-litres with respective outputs of 133kW/430Nm. As indicated by the image, the eight-speed automatic gearbox will also be carried over along with the SuperSelect II four-wheel-drive system on some models.

At present, a local launch date has not been confirmed, but expect the Sport to arrive either towards the end of the year or in early 2020.