A staple within the ultra-popular luxury MPV segment in Japan, the Indian importer for Toyota has confirmed that the six-seat Vellfire will become the marque’s new flagship people mover in October. The announced comes after the Vellfire’s more restrained sibling, the Alphard, debuted at the Auto Expo in New Delhi last year as a way of garnering interest. According to the report from indianautosblog.com, only the Vellfire will be introduced despite it differing from the Alphard only in terms of cosmetics.

Initially set to be limited to 200 units only, final specification for the Vellfire, which entered into its third generation four years ago, is yet to be confirmed, although in Japan it comes powered by a choice of three engines; a normally aspirated 2.5-litre four-cylinder producing 134kW/235Nm, a 3.5-litre V6 outputting 221kW/361Nm and a hybrid which combines a 112 kW version of the 2.5-litre engine with a 50 kW electric motor for a total system output of 145 kW. 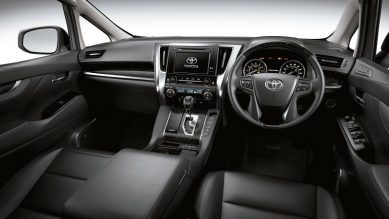 Whereas the four-cylinder engines are teamed to a CVT, the V6 is paired to an eight-speed automatic with some models also having the option of all-wheel-drive. At present, pricing for the Indian Vellfire is projected to start at Rs 7 500 000 (R1 505 587).

Like with the HiAce (Quantum) derived Granvia set for the Australian market however, the Vellfire is unlikely to become a local market fixture given the low uptake of full-size MPVs relative to SUVs in South Africa.