Heading for the Frankfurt Motor Show next month, Mercedes-Benz has taken the covers off of the second generation GLE Coupe ahead of its public unveiling at the German showpiece. Based on the same Modular High Architecture as the regular GLE, the coupe’s biggest departure is of course from the B-pillar backwards where it adopts a lowered roofline, a rounded rear facia similar to the E-Class and S-Class coupes, a prominent ducktail-like spoiler integrated into the bootlid and restyled LED taillights.

Accordingly, the coupe measures 39 mm longer and seven millimetres wider than its predecessor, with the wheelbase having been stretched by 20 mm to 4 939 mm. Measuring 60 mm shorter than its sibling though, the coupe offers seating for five and can accommodate 655-litres of luggage, or 1 790-litres with the 40/20/40 split rear seat folded down. With the latter figure improving on the previous coupe’s load capacity by 70 mm, the newcomer’s loading sill has been dropped by 60 mm, while the addition of the Airmatic suspension means that the rear-end can be lowered by a further 50 mm using a button on the boot wall.

Aside from the exterior, the coupe’s interior mirrors that of the standard GLE with the dual 12.3-inch instrument cluster display and MBUX infotainment system staring along with a selection of material finishes ranging from wood to aluminium and carbon fibre. Underneath its skin, the coupe can be specified with the aforementioned Airmatic suspension as an option with the E-Active Body Control system, which uses a 48-volt battery, being an additional extra. Compared to the GLE, the coupe’s engine line-up consists solely out of diesel engines for non-AMG models, with both turbocharged straight-six units displacing 3.0-litres and producing 200kW/600Nm in the GLE 350d, and 243kW/700Nm in the GLE 400d. A 9G Tronic gearbox is standard on both as is the 4Matic all-wheel-drive system.

Debuting at the same time, the AMG-fettled coupe comes in the form of the 53 whose aesthetic tweaks consists of the GT R-style Panamericana grille, a redesigned front apron with wider air intakes, a silver chromed front splitter, standard 20-inch AMG light alloy wheels with up to 22-inches available, chrome quad exhaust outlets, a thinner bootlid spoiler and a chrome surround diffuser. With stopping power being provided by AMG branded ventilated brakes utilising a two-piston caliper setup at the front and a single at the rear with discs measuring 400 mm and 345 mm respectively, forward motivation comes courtesy of the same 320kW/520Nm 3.0-litre turbocharged straight-six petrol engine used in the E53, CLS 53 and the GLE 53.

The sole petrol engine GLE Coupe, the motor is once again paired to the EQ Boost belt starter/alternator that releases an additional 16kW/250Nm for a few seconds, and contributes to the 53 dispatching the 0-100 km/h sprint in 5.3 seconds and reaching a limited V-Max of 250 km/h. Like the GLE 53, the amount of twist is send to all four wheels through the performance 4Matic+ system via a nine-speed MCT gearbox. 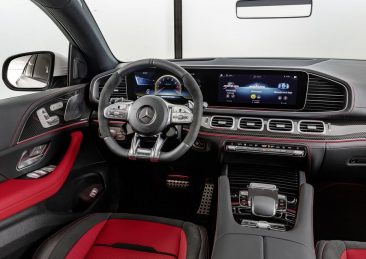 No pricing has yet been divulged, but expect the GLE Coupe to touch down in South Africa sometime next year.