One of the most highly awaited new models to emerge from the Porsche factory in recent years, the Stuttgart-based automaker officially debuted the all-electric Taycan at a special ceremony in Berlin this past Wednesday afternoon (August fourth).

Based on an adapted version of the Volkswagen Group’s MSB platform also used by the Panamera and the Bentley Continental GT, the production version of the 2015 Mission-E concept, according to Porsche, is said to represent a new era for the brand with the model still sporting more than a few styling cues derived from concept the 911 and its sedan sibling.

With its platform measuring 4 963 mm in overall length, the Taycan boasts a wheelbase of 2 900 mm and width of 2 144 mm with Porsche claiming a Cd rating of 0.22, helped by novel touches such as a glass effect badge, a lowered roofline, tapering front facia and hunched-up C-pillar. Claimed luggage space is 81-litres for the front hatch and 366-litres for the rear.

In a departure from current Porsche models, the Taycan ushers-in an all-digitally optimised interior highlighted by three screens; a digital instrument cluster and the 10.9-inch infotainment system that can optionally be extended towards the passenger and controlled by simply saying, Hey Porsche. A lower touchpad for the climate control rounds the tech display fest off. 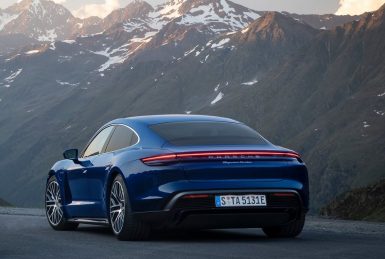 Underneath its skin, the Taycan comes as standard with the three-chamber Adaptive air suspension system that also includes Porsche Active Suspension Management electric dampers, as well as the sports tweaked Porsche Dynamic Chassis Control and Porsche Torque Vectoring Plus systems.

Initially, the Taycan will debut in flagship Turbo and Turbo S guises with lower output models and a Cross Turismo following next year. Despite the somewhat peculiar use of the ‘Turbo’ moniker seeing as neither Taycan model comes fitted with a turbocharged internal combustion engine, both models are likely to be more powerful than the incoming 911 Turbo thanks to a world first 800 volt power supply.

In simple terms, the on-board power station allows the Taycan to be charged-up in five minutes using a DC power source, meaning an instant range of 100 km and ability to be charged up to 80% in just 22.5 minutes with an output pegged at 270 kW.

Utilising a 93.4 kWh battery located in the rear footwell, a design Porsche refers to as ‘foot garages’, the Turbo punches out 460kW/850Nm with an overboot function taking the former up to 500 kW, while the Turbo S delivers the same power output, but with the overboost engaged, up to 560 kW and with a mammoth 1 050 Nm being produced. 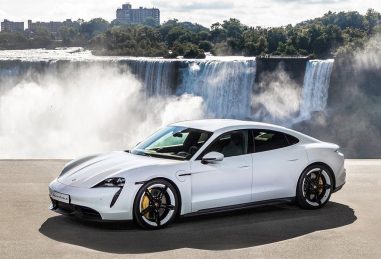 With Launch Control engaged, the Turbo will complete the 0-100 km/h sprint 3.2 seconds and the Turbo S in 2.8 seconds. Based on the WLTP scale, claimed range for the Turbo is 415 km and 450 km for the Turbo S with both reaching a limited top speed of 260 km/h.

In yet another difference from most electric cars, the Taycan sends its power to all four wheels via a uniquely designed two-speed transmission mounted on the rear axle. Forming part of the electric motor and pulse controlled inverter, the transmission’s ratios is setup for maximum acceleration from standstill in first, while second is aimed at efficiency by virtue of being taller. More interestingly, the transmission also handles up to 90% of the Taycan’s braking power, which Porsche claims will result in the actual stoppers lasting between 20 to 30 years. 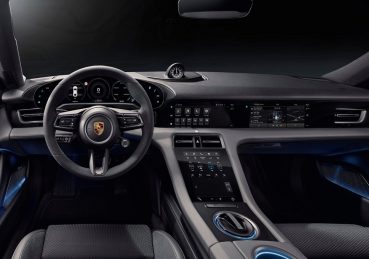 As standard, the Taycan employs a 10-piston steel caliper setup at the front with the rotors measuring 415 mm, while the rear arrangement sports a four-piston configuration with 365 mm diameter rotors. As an option though, the carbon ceramic brakes also come with a 10-piston caliper design at the front, but with the rotors measuring 420 mm and the four-piston rears 410 mm.

Aside from the brakes, the Taycan also comes with four modes; Normal, Range, Sport and Sport Plus with an Individual mode being separate.