The second best-selling new car in Brazil behind the Chevrolet Onix and often swapping places with the Ford Ka (Figo). Having first debuted the Grand i10 Nios for India last month and the all-new i10 for Europe earlier this week, Hyundai has now unveiled the third model in its global small car line-up, the new HB20.

Regularly the second best-selling new car in Brazil behind the runaway chart leading Chevrolet Onix, and often swapping places with the Ford Ka (Figo), the HB20 once again serves as a unique to market model with the newcomer retaining its predecessor’s Solaris platform, but with a 30 mm gain in wheelbase and styling derived from the new Sonata and Elantra. As before, it will be offered as a hatch, sedan (HB20S) and crossover (HB20X).

Although no images of the interior was released, Hyundai Brazil has confirmed that the HB20 will come with an eight-inch touchscreen infotainment system incorporating Apple CarPlay and Android Auto, a more simplified facia with less buttons and a new instrument cluster containing a digital speedometer. 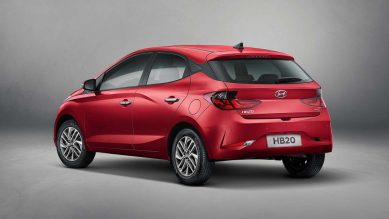 The biggest change however resides up front where Hyundai has dropped the normally aspirated 95kW/162Nm 1.6-litre flex-fuel engine for a 1.0 T-GDI that produces 88kW/172Nm. Essentially the same motor that does duty in the European-spec Hyundai i20, the blown three-cylinder is paired to a six-speed automatic gearbox with a six-speed manual available on the unassisted engine of the same size that makes 60kW/100Nm.

Build at Hyundai’s Piracicaba plant in Sao Paulo state, the HB20 will make its official public debut on 16 September and carry an anticipated starting price of R $50 000 (R182 062). As mentioned though, the HB20 will remain a Brazil specific model with the position of Hyundai’s smallest model in South Africa likely to be taken by the Grand i10 Nios or the i10.