GA-B can be outfitted with a torsion-beam or multi-link rear suspension to “elevate the design and driving performance of small cars”. Toyota has released first images and indeed details of its newest TNGA platform that will debut with the next generation Yaris.

Dubbed GA-B, the new platform joins the GA-C used by the Corolla, C-HR and Pruis, the GA-K that underpins the RAV4 and Lexus ES, and the GA-L used for the Lexus LC and LS, which is said to “deliver a drive that is confident and natural”.

Equipped with MacPherson struts at the front featuring low friction dampers that Toyota claims can accommodate a variety of spring types, the GA-B can additionally be outfitted with a torsion-beam or multi-link rear suspension claimed to “elevate the design and driving performance of small cars”. 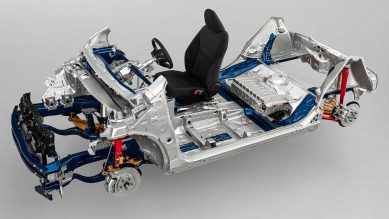 Boasting a rigid frame, the platform has been designed as such to provide a more engaging driving position and to maximise space through ‘smart packaging measures. In addition, it can also be stretched in wheelbase, length, height, and track to accommodate different models.

Aside from the Yaris due out next year, reports are that it could serve as a base for not only the production FT-4X, but possibly Mazda’s next generation of small cars following the signing of an agreement earlier last year that will result in production taking place at the new Huntsville Plant in Alabama due to be opened in 2021.