Funky new Audi A1 ready to tame the urban jungle

Since being launched locally in 2011, Audi’s A1 model has found favour with just over 13 700 South African buyers. Audi aims to fare even be­tter with their all-new A1 Sportback that was launched at the recent Kyalami Festival of Motoring. They call the newcomer “the ideal companion in the urban environment”, which indicates that […] Since being launched locally in 2011, Audi’s A1 model has found favour with just over 13 700 South African buyers. Audi aims to fare even be­tter with their all-new A1 Sportback that was launched at the recent Kyalami Festival of Motoring. They call the newcomer “the ideal companion in the urban environment”, which indicates that their expected customers should mainly be young, funky city folk.

Its exterior looks benefit from a wide track and short overhangs, a wide, low-placed single framed grille, implied side air inlets, wide, flat sloping C-pillars, full-LED daytime running lights front and two-part rear lights with striking 3D geometry. All of which give the vehicle a sporty look, somehow reminiscent of the qua­ttro rally cars from Audi’s glorious motorsport past. The new A1 will come in three engine sizes, with turbocharging, direct injection and a particulate filter as standard equipment.

The bott­om-line 30 TFSI S tronic model has a one-litre, three-cylinder engine, which develops 85kW of power and 200Nm of torque. Then comes the 35 TFSI S tronic 1 500cc four-cylinder unit with 110kW and 250Nm, while the top-of-the-range 40 TFSI S line S tronic model boasts the same two-litre as the Polo GTI, with 147kW and 320Nm.

Do not confuse the nameplates on the cars, denoting “30”, “35” and “40” with any technical specifications regarding said vehicles. They are simply model designations, seemingly plucked out of the air, in preparation, Audi say, for the arrival of all-electric cars. Right now, they make as much sense as the public protector’s grasp of the law. 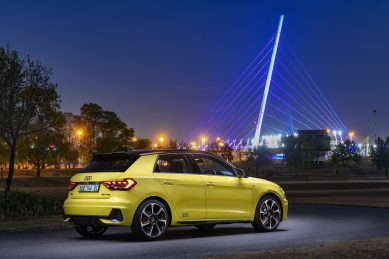 Audi is fitting a seven-speed S tronic dual-clutch transmission to the 1.0 and 1.5 engines. The top-of-the-range 2.0 engine offers a six-speed S tronic transmission. Brakes are discs all round and the wheels range from 15-inch to 18-inch alloy spoked rims, depending on the model.

The new A1 Sportback is much more spacious than its predecessor. Normal luggage capacity is 335 litres and with the rear seats folded down, this increases to 1 090 litres. The interior is driver-focused, with a compact unit of air vent nozzles and a high-resolution digital instrument cluster in all models.

Various seat and upholstery options are available, from standard cloth variations to sport variants in cloth or leather combinations. The infotainment package offers a MMI radio with voice recognition as standard – it can be operated via multifunction buttons on the steering wheel or a display in the instrument cluster.

Audi South Africa has introduced a package concept which aims to reduce complexity when ordering a new vehicle, considering that a customer is faced with a long list of options. We would need a book like the telephone directory to list all the options available in the three models. The most impressive to us included a variety of wheel and tyre sizes, anti-theft wheel bolts, a tyre pressure monitoring system, a start/stop system with regenerative braking, sports suspension with adjustable dampers, two-zone automatic air-conditioning and sports seats in front. We got to drive the 1.5-litre and two-litre models at launch and both impressed with easy driveability, impeccable handling and superb comfort.

Audi expect the 1 500cc example to be the top seller, but we liked the two-litre more. Running with the same floorpan and mechanicals as the Volkswagen Polo GTI, it goes really well, turns in like a race car, sounds right in “Sport” mode and generally makes you think you are driving be­tter than you actually are.

We think the new A1 Sportback will appeal to people we once called yuppies and sell be­tter than its predecessor. Even so, we think the price tags are high for vehicles that many would see as students’ or secretaries’ cars.

The Audi A1 range is priced as follows, along with a standard five year/100 000 km Audi Freeway plan