BMW South Africa has confirmed that only the Competition iterations will be available from May next year. Having made the rounds online for months in camouflaged pre-production and production forms, BMW has now officially taken the covers off of the X5 and X6 M ahead of their reported debuts at this weekend’s closing round of the DTM season at Hockenheim. Also set for unveiling at next month’s Los Angeles Auto Show, the latest iteration of Munich’s flagship M badged SUVs joins the X3 and X4 M in offering a Competition derivative for the first time. 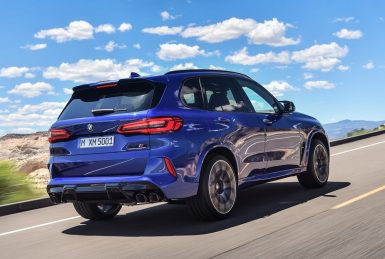 Competition models meanwhile feature a completely blacked-out grille, mirror caps, gills and rear apron, while a black Competition badge and optional carbon fibre boot spoiler round the changes off. A new Urban Green Metallic paint finish can be had on both variants as part of the BMW Individual catalogue.

Inside, the interior changes are more subtle with the inclusion of the leather wrapped M Sport steering wheel boasting the M1 and M2 mode buttons, an M gear lever, illuminated door sills, aluminium inserts with carbon fibre strips on the Competition, an anthracite Alcantara roofliner, M Sport seats and unique graphics and readouts within the 12.3-inch digital instrument cluster and on the Heads-Up Display. While bi-colour fine-grain Merino leather with M hexagonal quilting on the seats is standard in the regular M, the Competition can be specified with full-leather Midrand Beige/Black, Competition branded illuminated door sills and Alcantara inlays on the seats.

More extensive are the alterations underneath the skin where all four models benefit from a track optimised oil cooler, the Active M Differential that varies the engine’s power when in standard 4WD or 4WD Sport modes, a stiffer chassis and the M Adaptive Suspension with three modes; Comfort, Sport and Sport+. In addition, all are equipped with a Setup button that allows for the choosing of five modes; Efficient, Comfort, Sport and Sport+, as well as an M Mode with two further settings; Road and Sport with a Track mode added on the Competition.

As well as a recalibrated M Servotronic power steering system that comes with two modes of its own; Comfort and Sport, BMW has upgraded the brakes with stopping power being provided by a fixed, ventilated six-piston caliper setup at the front and single-piston at rear with the former’s discs measuring 395 mm and the latter’s 380 mm. In standard M guise, the X5 and X6 are outfitted with 21-inch M light alloy wheels with a polished black finished, star-spoke design optional, while the Competition rides as standard on 22-inch forged light alloys with a black polished star spoke design.

Up front, motivation comes from the same 4.4-litre bi-turbo V8 engine as the M5 and M8, which in the X5 and X6 M produces 441kW/750Nm. Paired to the eight-speed sport Steptronic gearbox with the rear-biased xDrive all-wheel-drive system in place, the M will reach 100 km/h from naught in 3.9 seconds and on to a limited V-Max of 250 km/h or 280 km/h with the optional M Driver’s Package. Like its sedan and coupe badged siblings, the X5 and X6 M Competition use the same engine and transmission, but with 460 kW now being sent to all four wheels. Torque is however unchanged at 750 Nm. Performance-wise, the Competition has the same top speed as the M, but shaves a tenth off of the benchmark acceleration time, meaning that the sprint takes 3.8 seconds.