The fourth uniquely styled Zagato model after the limited run Vanquish based models from two years ago, the GT, as its name suggests, is based on the DBS Superleggra and according to Gaydon, pays homage to the DB4 GT Zagato that kicked-off the association with Zagato in 1960. 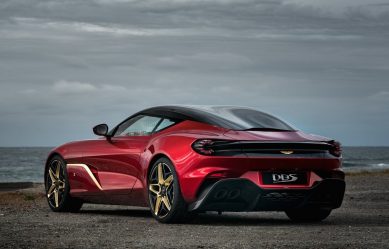 Finished in a colour called Supernova Red, the GT’s interior, although still recognisable as that of a DBS, receives a Caithness Spicy Red leather with the Zagato ‘Z’ logo embroidered onto the quilted seats, exposed carbon fibre inlays on the steering wheel and gear shift paddles and a choice of three material finishes; aluminium, carbon or physical vapour deposition gold that takes almost 100 hours to print. As ever, buyers wanting more will have a series of customisation features available as per Aston’s Q by Aston Martin personalisation programme. 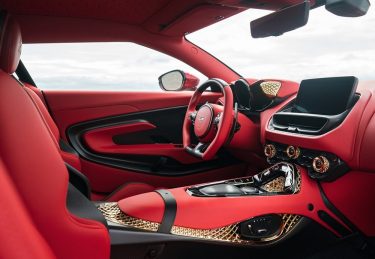 Up front, the GT is kept standard by retaining the DBS’s AMG-sourced 5.2-litre twin-turbo V12 that makes 533kW/900Nm. A ZF-sourced eight-speed Touchtronic automatic gearbox sends the amount of twist to the rear wheels with the top speed likely to be same 339 km/h V-Max as the DBS coupe. Expect 0-100 km/h to be wrapped-up in 3.4 seconds.

Part of Aston’s DBZ Centenary Collection, the DBS GT Zagato will be limited to 19 units and sold along with an original DB4 GT Zagato as a collective with a sticker price of £6-million (R111 404 040).