Having remained under wraps since bowing as a concept at the Geneva Motor Show in March, the alleged production version of the Alfa Romeo Tonale SUV has leaked online.

Gunning for the Audi Q3, BMW X1/X2, Mercedes-Benz GLB, Range Rover Evoque and the Volvo XC40, the images, posted by autopareri.com in a so-called ‘test clinic’, shows the Tonale, which takes its name from the Tonale Pass in the Italian Alps, bearing only small differences from the concept such as the sealed, arrow-shaped LED headlights, conventional mirrors and door handles, and slightly longer wraparound taillights.

While no images of the interior were depicted, expect this to be significantly toned down from the concept, but likely to retain the 12.3-inch digital instrument cluster and the 10.25-inch infotainment system. While it is known that the Tonale will ride on the Small Wide 4×4 platform also used by the Fiat 500X and Jeep Renegade, its assortment of engine options are unknown bar the plug-in hybrid the concept debuted with.

According to Britain’s Autocar though, Alfa Romeo Global Head, Tim Kuniskis, said that the Tonale will “embrace our core brand principals: advanced engine technology, electrification, distance proportions and stunning Italian design” before adding that, “we will not launch just another CUV. We will launch a CUV as only Alfa can”. 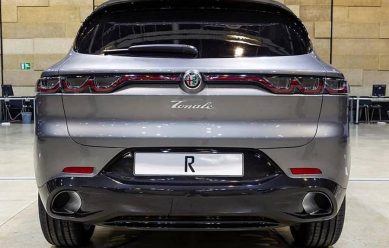 At the same time, Alfa Romeo Brand Chief for Europe, the Middle East and Africa, Roberta Zerbi, said Milan expects the Tonale to become its best-selling model in helping it reach its goal of selling 400 000 vehicles per annum.

“Combined with our other new products, we expect to have a car to suit the needs of around 80% of all European car buyers by 2024, and that puts Alfa in a much stronger position than today,” she said.

Fiat-Chrysler Automobiles (FCA) CEO Mike Manley has however stated that a long road still awaits the iconic marque in reaching said goal as it was “an over ambitious estimation of how big the brand can grow”.

“The plans have been reset to an extent. But there still has to be relatively strong growth rates. There’s a fine line between a brand growing because the customer base likes the brand and what it stands for, or you drive down prices. I don’t want the latter,” Manley said.

Production of the Tonale is set to commence next year with sales anticipated to kick-off in 2021.