Elva can be specified with a range of customised trim pieces, including a 24 carat gold engine bay heat shield reminiscent of the McLaren F1 McLaren has revealed the most extreme model of its Ultimate Series to date when it lifted the wraps off of the dramatic Elva on Wednesday evening (13 November).

The fourth model in the mentioned range after the P1 TM, Senna and Speedtail, the Elva is said to take inspiration from the M1A, M1B and M1C CanAm racers from the 1960s and will be offered without a roof when it goes on sale.

While a windscreen can be had as an option, the Elva, according to McLaren, rates as the first model to feature the marque’s Active Air Management System (AAMS) which channels air through the nose and then out of the clamshell ‘bonnet’ before reaching the cockpit.

Dubbed the “bubble of calm”, the AAMS consist of the all carbon fibre clamshell and a deployable deflector that rises automatically by up to 150 mm, but which can be deactivated by the driver. Although helmets are likely to be worn by most drivers, McLaren claims that the bubble effect makes this unnecessary. 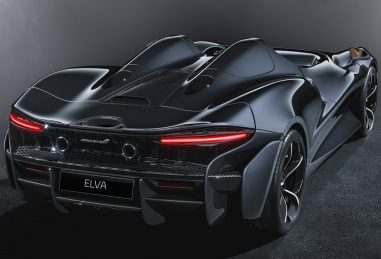 The attention to aero continues at the rear where the rear deck features an active full-width rear spoiler at its base that also functions as an airbrake when stopping from high speed. In addition, the rear diffuser is designed to work in conjunction with the spoiler by featuring vertical fences that channels airflow.

Boasting a completely flat-floor, and with Dihedral opening doors made from carbon fibre and placed on a single hinge, the Elva also has a bespoke interior with the all-digital instrument cluster being flanked by an eight-inch touchscreen infotainment system angled towards the driver. As a means of saving weight, the Elva comes without a sound system.

With carbon fibre present throughout the interior, the Elva can however be specified with a range of customised trim pieces, materials and colours as per McLaren’s Special Operations (SVO) division, which includes 18 carat white gold or platinum badges, ultra-thin carbon fibre and a 24 carat gold engine bay heat shield reminiscent of the McLaren F1.

Providing motivation is the same 4.0-litre twin-turbocharged V8 lifted from the Senna that has been tuned to produce 600kW/800Nm. Mated to a button activated seven-speed dual-clutch gearbox, McLaren claims that the Elva will get from 0-100 km/h in “less than three seconds” and from 0-200 km/h in 6.7 seconds. Surprisingly, no top speed figure was revealed. 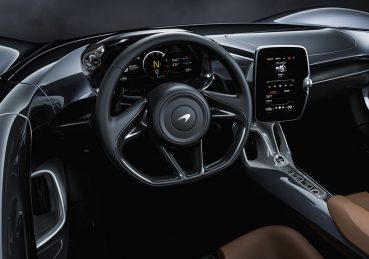