Unveiled as a concept in Shanghai two years ago, Audi has followed-up the reveal of the all-electric e-tron in Geneva earlier year and then in South Africa in August at the Kyalami Festival of Motoring by taking the covers off of the coupe-styled Sportback at the Los Angeles International Auto Show this past week.

Differing from the regular e-tron only in design with the sloping roofline and rounded rear facia mirroring that of the Q3 Sportback, the e-tron Sportback measures 4 901 mm in overall length with a wheelbase of 2 928 mm, width of 1 935 mm and height of 1 616 mm, with Audi claiming a boot space of 615-litres or 1 655-litres with the split rear seat folded down.

Like its traditionally styled sibling, the Sportback will be offered in two trim levels; base and S line with the latter receiving a sports air suspension, an S line bodykit, 20-inch alloy wheels, S branded illuminated door sills, an integrated boot spoiler and rear diffuser, plus the optional Black Package for the window surrounds, Singleframe grille, mirror caps and the bumpers. 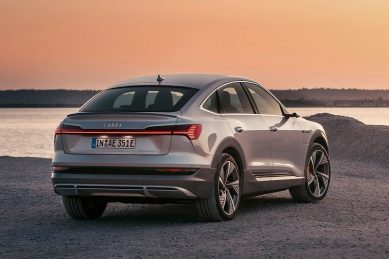 Riding as standard on 19-inch alloy wheels with up to 22-inches optional, the Sportback’s interior is also unchanged from the e-tron with the 12.3-inch Virtual Cockpit Display instrument cluster being retained along with the 12.1-inch MMI plus navigation infotainment system plus the 8.6-inch climate control panel.

Model-wise, the Sportback will initially consist out of two derivatives with the 50 quattro serving as base model. In this guise, motivation is provided by a 71 kWh lithium-ion battery pack that produces 230kW/540Nm. According to Ingolstadt, this allows the 50 to reach 100 km/h from naught in 6.8 seconds and top out at 190 km/h. 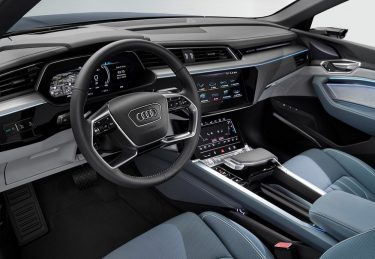 Arriving in the European spring next year, pricing for the e-tron Sportback kicks-off at €71 350 (R1 153 878) in Germany, but don’t expect it, for the moment, to become available in South Africa.