Nissan Sentra puts on a sleeker suit in LA

Nissan has also provided the Sentra with more poke by replacing the 1.8-litre engine with a 2.0-litre that produces 110kW/197Nm Having quietly exited South Africa just over two years ago after a less than impressive return some three years prior, Nissan this past week unveiled the all-new eighth generation Sentra at the Los Angeles International Auto Show.

As with previous generations, the newcomer is once again derived from the Sylphy sold in Asia, and arrives in North America seven months after its sibling bowed at the Shanghai Motor Show.  Compared to the previous Sentra, the internally designated B18 takes more than a few styling hints from the bigger Altima and Maxima such as the pronounced V-motion grille, thin LED headlights with the boomerang shaped integrated daytime running LEDs, floating roof and seemingly longer overall profile. Inside, the interior comes as the biggest departure with not only upgraded materials, but also a freestanding seven-inch touchscreen infotainment system. From SV models upwards though, the display gains an additional inch and also adds Apple CarPlay and Android Auto as well as Voice Recognition, while the 4.2-inch TFT instrument cluster display makes way for a bigger seven-inch setup.

In terms of equipment, and depending on the trim level, made up of the entry-level S, the aforementioned SV and flagship SR, the Sentra can be had with heated front seats, Intelligent Cruise Control, Automatic Emergency Braking with Pedestrian Detection, 16-inch steel or alloy wheels with the SR getting 18-inch alloys, Rear Cross Traffic Alert with Automatic Braking, 360 degree camera system, dual-zone climate control, a six-speaker sound system, Blind Spot Warning, Lane Departure Warning, Auto High Beam Assist, Driver Alertness and up to 10 airbags. 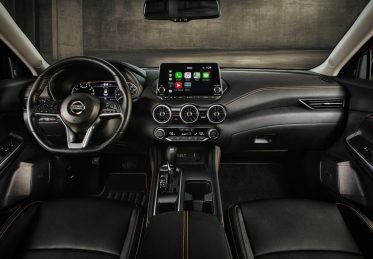 Sitting 56 mm lower to the ground, Nissan has also provided the Sentra with more poke by replacing the 1.8-litre engine with a 2.0-litre that produces 110kW/197Nm. Gone however is the six-speed manual gearbox previously only available on the S, with all models receiving an Xtronic CVT as standard.