Toyota has re-introduced the 4.0 V6 petrol engine to the Hilux in Brazil, but in a surprise move, at the expense of the 2.8 GD-6 motor and only in the GR Sport.

Unveiled in Brazil last year at the Sao Paulo Motor Show before its South African debut four months ago, autopapo.com.br reports that the V6, which currently powers the Fortuner, Land Cruiser 79 and Land Cruiser Prado, will not receive any power upgrades and therefore continue to produce 234 horsepower or 175 kW with torque being rated at 375 Nm. Like the oil-burner, the bent-six is mated to a six-speed automatic and sends the amount of twist to the rear wheels, or all four wheel via the selectable four-wheel-drive system with low range.

Aside from its new heart, the GR Sport has been mildly tweaked on the outside in the form of a new, blacked-out grille still resplendent with the TOYOTA logo, a chrome V6 logo mounted next to the GR decal on the tailgate and six-spoke 17-inch alloy wheels that are silver and not black like on the diesel. 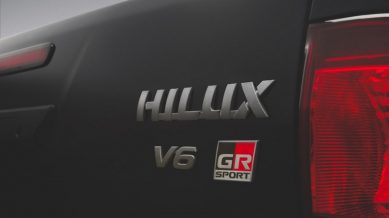 With the exception of the smaller seven-inch touchscreen infotainment offered in South America, the GR Sport’s interior differences relative to the standard Hilux are unchanged, but with tweaks underneath such as improved dampers and uprated off-road suspension.

While no pricing has been yet been announced, the petrol GR is likely to be more expensive than the outgoing GD-6, which retailed from R $206 990 (R716 127) in Brazil. As a reference, the South African-spec GR Sport currently carries a sticker price of R714 500 while the V6 engine Legend 50 is priced at R719 200. Sales in Brazil and Argentina have been pencilled-in for February next year, but at present nothing has been confirmed for South Africa.