With an all-new model reportedly coming in 2022 with power set to be provided by BMW, Jaguar this past week unveiled the facelift F-Type due to go on sale next year.

Its first major overhaul since debuting as replacement for the XK six years ago, the F-Type now takes after the XE in that the front facia has been redesigned to incorporate a new bumper with wider air intakes, a new bonnet, wider hexagonal grille whose surrounds can be finished in gloss black or chrome and so-called pixel LED headlights with integrated J-shaped daytime running LEDs.

At the rear, the revisions are more subtle with I-Pace derived LED light clusters featuring a chicane graphic, a redesigned number plate cavity, exhaust outlets integrated into the diffuser, the option of having the Jaguar logo finished in gloss black when specified with the Black Pack or Black Design Pack and new alloy wheel designs. 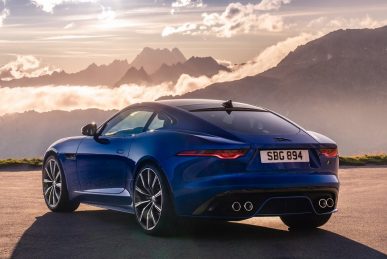 Inside, the instrument cluster is all digital with the 12.3-inch display also receiving bespoke F-Type graphics, while the infotainment system is upgraded to Jaguar’s latest 10-inch Touch Duo with Apple CarPlay and Android Auto. In addition, buyers can opt for two seat choices; Sport and Performance that are both cooled and heated, Mars or Flame Red stitching, Windsor leather and alloy gear shift paddles.

Riding as standard on 20-inch alloy wheels wrapped in Pirelli PZero rubber, Jaguar has provided the F-Type with upgraded brakes in that the front discs measure 380 mm and the rears 376 mm, while on the flagship R, the carbon ceramic matrix stoppers utilise a yellow painted six-piston caliper setup at the front and four at the rear with the respective discs measuring 398 mm and 380 mm.

Up front, the F-Type’s engine options will again be made up of four, six and eight-cylinder motors, all mated to the eight-speed Quickshift automatic gearbox as the six-speed manual has been dropped altogether. 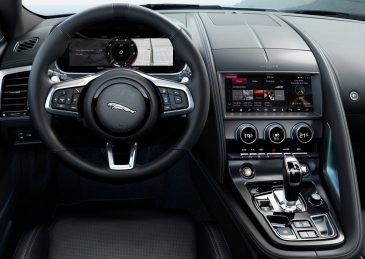 Still serving as the entry powerunit, the 2.0-litre turbocharged four-pot again produces 221kW/400Nm which allows the F-Type to sprint from 0-100 km/h in 5.7 seconds and on to a top speed of 250 km/h. Along with the manual ‘box, Jaguar has also dropped the 250kW/450Nm 3.0-litre supercharged V6 for a 5.0-litre supercharged V8 that delivers 331kW/580Nm, and which offers the option of rear-or-all-wheel-drive.

Carried over however is the 280kW/460Nm version of the aforementioned V6 that now boasts a limited slip differential in addition to having the option of rear-or-wheel-drive, while the F-Type R is again equipped with the all-paw gripping system as standard, as well as the venerable supercharged V8 that has been upgraded from 405kW/680Nm to 423kW/700Nm.

Confirmed to arrive in South Africa next year, Jaguar has revealed that the F-Type range will be made up of eight models; the aesthetically enhanced R-Dynamic offered with the 221 kW motor or the 280 kW V6, the limited First Edition fitted powered by the latter motor and with all-wheel-drive only, and the R as range topper. All eight will be available as either a coupe or cabriolet with pricing to be announced next year.