Reims pays tribute to the 1954 12-hour race in which Ken Wharton and Peter Whitehead recorded an average speed of 105 mph or 169 km/h behind the wheel of a Jaguar D-Type. Jaguar-Land Rover (JLR) has unveiled special edition versions of the XE and Velar in limited numbers and in the United Kingdom only. 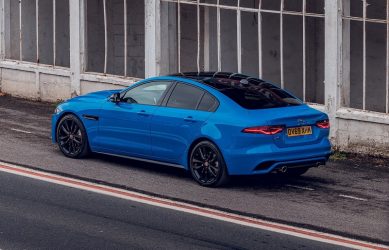 Named after the now abandoned Reims-Gueux circuit that hosted the French Grand Prix 11 times between 1950 and 1967, the Reims pays tribute to the 1954 12-hour race in which Ken Wharton and Peter Whitehead recorded an average speed of 105 mph or 169 km/h over 2 000 km behind the wheel of a Jaguar D-Type.

In what is essentially a cosmetic overhaul, the Reims includes the R-Dynamic styling pack as standard, in addition to a black contrasting roof, gloss black 19-inch five-spoke alloy wheels, black mirror caps and door sills, plus a bespoke colour called French Racing Blue. Aside from a number of options such as the Black Pack that sees the grille, window surrounds and side vents being painted black and the Cold Climate Package that adds a heated windscreen, steering wheel and headlight washers, the Reims’ interior is unchanged from standard XE with the same being true of the engine.

Powered by the 2.0-litre Ingenium turbocharged petrol motor, the Reims produces the same 184kW/365Nm as the XE P250 with drive once again going to the rear wheels via an eight-speed ZF-sourced automatic gearbox. Available now, the Reims Edition will be restricted to 200 units and carry a sticker price of £38 295 (R743 091). With the recent introduction of the Sport ‘Black’ in South Africa, JLR has made the moniker official for the Velar that builds on the R-Dynamic styling pack already available.

Using the SE-spec D180 as a base, the Black comes decked-out in Santorini Black or Eiger Grey and adds gloss black 21-inch alloy wheels, a fixed panoramic glass roof, privacy glass and the Adaptive Dynamics system, while the interior benefits from a Ebony Morzine headliner, a heated steering wheel and perforated Ebony grained leather upholstery. Like the XE Reims, the Black is unchanged from the model on which it is based up front, where the 2.0 Ingenium turbodiesel engine continues to produce 132kW/430Nm that is channelled to all four wheels via the ZF eight-speed automatic ‘box.