Hyundai has released a pair of sketches teasing its all-new Aura sedan that will bow in India this coming Thursday (19 December).

According to Autocar India, the Aura will essentially serve as the booted version of the Grand i10 Nios that bowed earlier this year, and replace the previous generation Grand i10-based Xcent that will continue to be available for fleet buyers only.

As indicated by the drawings, and aside from the addition of the boot, the Aura will differ slightly from the Nios aesthetically with front-end styling still being derived from the all-new Sonata that debuted in New York eight months ago, while the rear facia bears resemblance to that of the first generation Genesis Coupe shown in the Big Apple nearly ten years ago. 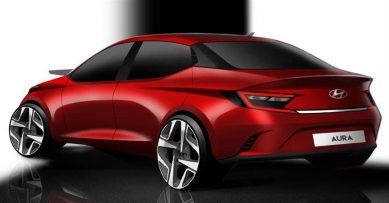 While the interior is poised to mirror that of the Nios in terms of layout, design and equipment, the Aura’s powertrain line-up will be different in that it will feature a more powerful turbocharged petrol as flagship.

Accordingly, motivation will come from the same normally aspirated 63kW/114Nm 1.2-litre three-cylinder petrol and 55kW/190Nm 1.2-litre turbodiesel engine as the Nios, but add the 1.0 T-GDI motor from the Venue that will be retuned to produce around 74 kW instead of 88 kW. On the former pair, a five-speed manual gearbox will be standard and a five-speed automated manual (AMT) optional, though the T-GDI will make do with the manual ‘box only.

Going on sale across India next month, it remains to be seen whether the Aura will be earmarked for South Africa as two of its biggest rivals in its home market, the Ford Aspire, known locally as the Figo Sedan, and Suzuki DZire are offered on local shores.