Hyundai has taken the wraps off of its smallest sedan to date, the Aura, ahead of its official market debut in India on 21 January.

As previously indicated, the Aura serves the sedan version of the Grand i10 Nios and while positioned below the Verna, known in South Africa as the Accent, in Hyundai’s three-box line-up, it replaces high-end derivatives of the Xcent that will remain on sale for fleet operators.

Measuring 3 995 mm in overall length with a wheelbase of 2 450 mm, height of 1 520 mm and width of 1 680 mm, the Aura’s obvious difference from the Nios is its boot which can swallow a claimed 402-litres of luggage with the rear seats in place.

It is otherwise identical at the front and inside where equipment, depending on the trim level, includes an eight-inch touchscreen infotainment system with Apple CarPlay and Android Auto, a digital instrument cluster display and wireless smartphone charger, rear air-conditioning vents, a reverse camera and a high-end Arkamys sound system. 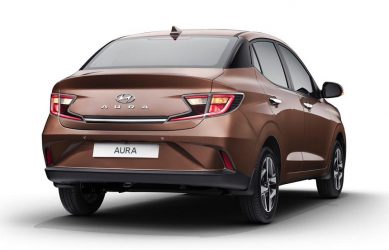 As well as the same platform, two of the Aura’s three engine options are shared with the Nios; the normally aspirated 1.2-litre three-cylinder petrol that produces 63kW/114Nm and the similarly sized turbodiesel that punches out 55kW/190Nm. A five-speed manual gearbox is standard on both with a five-speed automated manual (AMT) optional.

Capping the range off, the 1.0 T-GDI three-pot is shared with the Venue, but detuned from 88 kW to the same 74 kW as the Kia Picanto GT-Line. Torque is unchanged at 172 Nm with the five-speed manual being the sole transmission option available.