6.6-litre twin-turbo V12 “may not have a future” given the costs required to make it comply with stipulated regulations. Having confirmed the exit of the 3 Series Gran Turismo earlier this week as part of an extensive cost cutting measure, BMW’s Head of Research and Development, Klaus Fröhlich, has now confirmed that the brand’s quad-turbodiesel engine and twin-turbo V12 will follow the same route.

In an in-depth interview with Automotive News Europe, Fröhlich said that ever more stringent emissions regulations and popularity of plug-in hybrid and electric vehicles are becoming more crucial factors to take into account rather than spending money on updating existing internal combustion engines to meet requirements.

“Regulations on internal combustion engines are accelerating and getting more diverse all over the world. We have to update our engines every year, especially for China. Because this costs a lot of money, we have to streamline our offerings,” Fröhlich said.

“On the diesel side, production of the 1.5-liter, three-cylinder entry engine will end and the 400-hp, six-cylinder won’t be replaced because it is too expensive and too complicated to build with its four turbos. However, our four- and six-cylinder diesels will remain for at least another 20 years and our gasoline units for at least 30 years”.

Admitting that most buyers in Europe are more likely to opt for a plug-in hybrid than a full-on electric vehicle, Fröhlich nonetheless said BMW expects electrification to make 20-30% of sales worldwide by the end of the decade, but added that sales at present are projected to be in favour of petrol and diesel engines by 50%, with plug-in hybrids making up 25% and battery operated vehicles the rest. 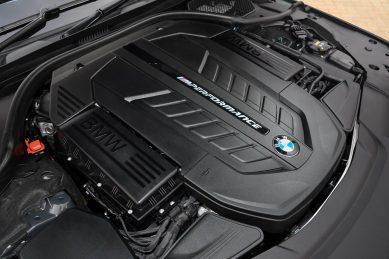 Quizzed about the brand’s 6.6-litre twin-turbo V12 that was rumoured as far back as 2018 as heading for retirement, Fröhlich said that the powerunit for the BMW M760Li xDrive and various Rolls-Royce models “may not have a future” given the costs required to make it comply with stipulated regulations.

“When it comes to the V-8, it’s already difficult to create a strong business case to keep it alive given that we have a six-cylinder high-powered plug-in hybrid unit that delivers 441 kilowatts (600 hp) of power and enough torque to destroy many transmissions,” he said.

At present, it is rumoured that the all-new G70 series 7 Series, currently undergoing final testing before reportedly debuting next year, will have a plug-in hybrid model as its flagship in the shape of the M750Le whose 3.0-litre turbocharged straight-six will be paired to an electric motor for a total system output of 410kW/800Nm.

It will however be positioned below the all-electric i7 whose so-called next level batteries could will allegedly produce as much as 120 kWh, resulting in an output of 485 kW and range of up to 700 km on a single charge.