Auto ‘box can be had as an option on the newly introduced S11 derivative and its aesthetically enhanced Karoo offshoot. With production at its plant in Durban well underway, Mahindra has added to its popular Pik-Up range the option of a six-speed automatic gearbox.

A first for not only South Africa but also globally, the auto ‘box can be had as an option on the newly introduced S11 derivative and its aesthetically enhanced Karoo offshoot, still paired to the 2.2-litre mHawk turbodiesel engine that produces 103kW/340Nm.

Available in rear-or-four-wheel-drive, the introduction of the auto transmission has also resulted in minor updates across the range, with the S11 differentiating itself from the manual only S10 by incorporating new headlights and a slightly altered grille, chrome fog light surrounds, a revised lower air intake and colour-coded mirrors with integrated indicators.

Initially unveiled in 2018 to celebrate the beginning of local production, the S11 based Karoo features a new lockable roller bed cover with the bin itself being rubberised, unique side decals, a black nudge bar and sports bar, and off-road focused black alloy wheels with chrome accents.

Inside, the S11 builds on the specification of the S10, but comes with a new seven-inch touchscreen infotainment system featuring Bluetooth, satellite navigation as well as the display for the reverse camera, and climate control.

As mentioned, Mahindra has also tweaked the rest of the Pik-Up range with the entry-level S6 Karoo receiving the same decals and trim items as the S11, while the S10 Karoo also benefits from said additions, but swaps the roller cover for a traditional tonneau cover and new alloy wheels. 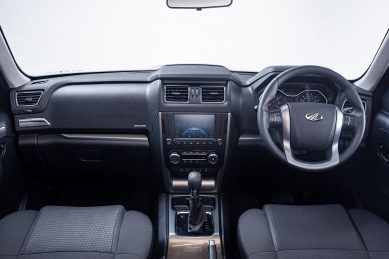 In spite of the auto ‘box, the Pik-Up’s various dimensions have not changed with all models boasting a ground clearance of 210 mm, while the payload is rated at 1 095 kg for rear-wheel-drive models and at 995 kg for the four-wheel-drive. Braked trailer towing capacity is rated at 2 500 kg with an Eaton-sourced limited slip differential being standard across the range.

A four year/120 000 km warranty and five year/90 000 km service plan is standard on all models bar the entry-level, single cab only S4 workhorse where the latter can be had as an option.