Legends of motorsport’s past heading for Zwartkops Passion of Speed

To view will be a 1957 Maserati 250F, of which just 26 were built. The car, never before seen on these shores, is to be driven around Zwartkops at racing speeds, RARE, VERY RARE. Only 26 Maserati 250F cars were built, and one of them will be driven around Zwartkops at racing speeds on 1 February.

Many of these cars will race at Zwartkops during the 2020 Passion for Speed events in 10 days’ time. The 18 cars will be in SA courtesy of the international Historic Grand Prix Cars Association. Present and willing will be the 1962 Lotus 18/21 Climax of Gary Hocking, the Trevor Blokdyk Cooper-Alfa, the South African championship winning Lotus 18 Alfa of Syd van der Vyver, the Heron-Alfa of Ernest Pieterse, a front-engined Lotus 16, one of the first F1 cars that Collin Champion built, plus a host of Coopers.

Other legendary cars will include a Cooper Maserati, driven back then by Don Phillip, Trevor Blokdyk and John Love, a Brabham B11 – the ex-Jack Brabham car that raced in the 1964 East London Grand Prix, and an LDS Alfa. Two other cars, not from the same era, will add lustre to proceedings.

To view will be a 1957 Maserati 250F, of which just 26 were built. The car, never before seen on these shores, is to be driven around Zwartkops at racing speeds. Back in 1956, both Stirling Moss and Juan-Manuel Fangio raced them in F1 Grands Prix. 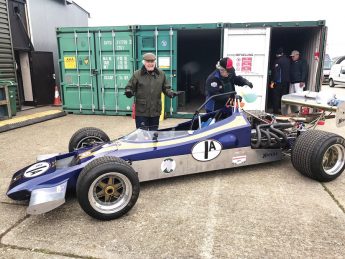 EXCITING STUFF. Some lucky people will get to go around Zwartkops in the rear seat of this Formula-5000 Lola Chevrolet.

Another favourite will be a twin-seater Lola Formula 5000, in which a number of lucky people will get the opportunity to go for tandem rides around Zwartkops. Formula 5000 originated in the US in the 1970s, using F1 chassis designs hooked up to five-litre American V8 engines. All the leading F1 producers and teams of the time built F5000 cars – McLaren, Lola, Lotus, Chevron and Cooper.

On Sunday, 2 February, there will be races for 1000cc and 600cc Superbikes, Red Square Kawasaki ZX10 Masters, plus Bridgestone Superbikes and Challenge riders. Racing apart, there will be activities like helicopter flips, drifting demonstrations, passenger drives on the kart circuit, skidpan activities and some rough stuff on the venue’s 4×4 track.

Various car and motorcycle clubs will have static displays, while a motoring-orientated flea market will offer memorabilia. There will be food and drink on sale, while the circuit’s kiddies’ entertainment area will offer youngsters clowns, face painting, pedal-car rides and the like. Spectators are welcome to bring their own food and drink, cooler boxes, gas braais and gazebos.

The venue’s open pit policy will mean everybody is invited to visit the pits on foot at any time. You do not have to walk far to do that. The venue’s Mini Moke trains will run throughout the event, operating between the pit gate and the various vantage points. Tickets are available at iTickets.co.za.