In spite of spy images earlier this month completely revealing the all-new Kia Sorento, the South Korean automaker has continued dropping hints with the latest being a number of sketches showing the interior.

A radical departure from that of the outgoing Sorento, the cabin sports a more minimalist appearance with the facia featuring an H-shaped design for the air vents and being topped by a freestanding touchscreen infotainment display flanked by an all-digital instrument cluster.

Along with a Telluride derived steering wheel, the centre console has been redesigned with the most prominent addition being the rotary gear selector dial in place of the previous gear lever. Also present are a selection of smaller buttons for the start/stop system, handbrake, Hill Descent Control and Park Assist, well as a secondary rotary knob for what appears to be drive mode selector.

In a further surprise, Kia has also released sketches of the Sorento’s exterior, effectively confirming of what has already been seen via the mentioned spy images that leaked online last week.

Meanwhile, and in a separate post, The Korean Car Blog has published a complete list of the Sorento’s powertrains for the domestic market that includes not only petrol and turbodiesel units, but also a model first plug-in hybrid shared with the Hyundai Santa Fe.

According to the spread sheet, petrol power will come from a normally aspirated 2.5 paired to either a six-speed manual or six-speed automatic gearbox and the plug-in hybrid that pairs a 1.6-litre turbo with an electric motor with the six-speed self-shifter being the sole option. 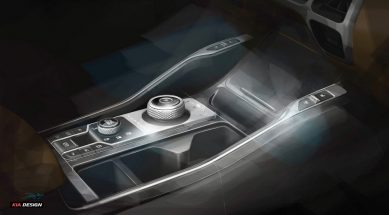 Outside its home market, the Sorento will reportedly be offered with a smaller 2.0-litre oil-burner as well as a non-hybrid 1.6 T-GDI and for North America, a 2.0 T-GDI and 2.5 T-GDI in place of the current 3.5-litre V6. As before, the Sorento will provide seating for five or seven.

Due to go on sale later this year, the Sorento will make its official debut at the Geneva Motor Show next month, although the Korean-spec derivative will bow on 17 February.