The most powerful i30 to date is powered by a 2.0-litre turbocharged engine that produces 202kW/353Nm. Lauded in various international reports after making its world debut at the Frankfurt Motor Show three years ago, Hyundai has officially detailed the eagerly awaited i30 N now available in South Africa.

The first official model to wear the South Korean marque’s N performance moniker and developed from its exploits in the World Rally Championship (WRC), the most powerful i30 to date is powered by a 2.0-litre turbocharged engine that produces 202kW/353Nm. 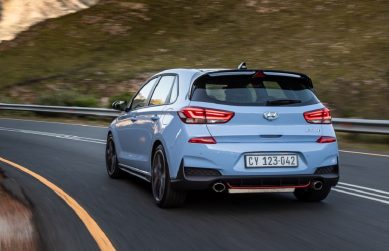 Part of the so-called Performance Package where the output in question is raised by 18 kW over the ‘regular’ i30 N, additional tweaks include an electronic limited slip differential, a variable exhaust system, N-branded red brake calipers and 19-inch alloy wheels wrapped in Pirelli PZero rubber.

Further equipped with a five-mode drive selector; Eco, Normal, Sport, N and N Custom, the i30 N will reach 100 km/h from standstill in 6.1 seconds and on to a limited top speed of 250 km/h. With a dual-clutch gearbox currently under development and only expected to become available later this year, the sole transmission for now comes in the form of a six-speed manual. Fuel consumption is a claimed 8.5 L/100 km. Priced at R679 900 and only available at  14 selected Hyundai dealership across South Africa, as well as one each in Botswana and Namibia, the i30 N comes standard with a seven year/200 000 km warranty as well as a five year/75 000 km service plan.