Subaru gearing up for all-new Levorg in October

Engine will produce 147kW/280Nm and likely transmit that through a CVT to all four wheels. Previewed as a concept at the Tokyo Motor Show last year and by the prototype STI Sport at the Tokyo Auto Salon in January, a report from Japan has alleged that Subaru will take the wraps off of the second generation Levorg in October this year.

Set to become the latest model to move onto Subaru’s new Global Platform, and one of the first to feature the brand’s latest Dynamic x Solid styling language, Japan’s Best Car reports that the Levorg will measure 4 720 mm in overall length with a wheelbase of 2 675 mm, height of 1 490 mm and width of 1 800 mm. 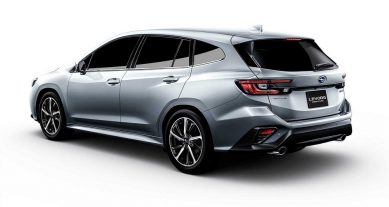 Already confirmed to receive Subaru’s first electronically controlled damper system and drive mode selector, the report also sheds light on the all-new 1.8-litre turbocharged flat-four engine that will allegedly replace the outgoing model’s 1.6 and 2.0-litre units. Reportedly destined for the incoming Toyota GT86 and Subaru BRZ, the engine, in the Levorg, will produce 147kW/280Nm and likely transmit that through a CVT to all four wheels. Unlike the BRZ though, a manual transmission is unlikely to be offered.

Despite being branded as a concept, and with the windows tinted to avoid images of the interior emerging, expect more details to be revealed or leaked in the coming weeks and months.