Reported in November last year as being mulled for a possible return in two years’ time, Volkswagen has instead sprung a surprise by reviving the R moniker as the new flagship version of the Touareg range.

Returning after a hiatus of twelve years, the R also signals a departure for Wolfsburg’s performance moniker by being resplendent on a plug-in hybrid model for the first time, with the 5.0 TDI V10 engine from the Touareg R50 TDI making way for a 3.0 TSI V6 that produces the same 250 kW as the Porsche Cayenne S E-Hybrid, but with the inclusion of a 14.1 kWh lithium-ion battery pack that adds an additional 100 kW.

With a combined system output of 340kW/700Nm and an all-electric range of 45 km/h at speeds up to 140 km/h, the R will reach a limited top speed of 250 km/h with the amount of twist being transmitted to all four wheels via an eight-speed Tiptronic gearbox. 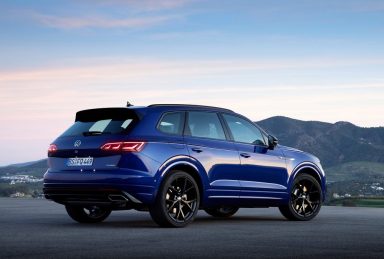 While no 0-100 km/h acceleration figure were revealed, the R boasts a Torsen centre differential lock that can send as much as 80% of the mentioned power to the rear wheels, with four driving modes being offered; Eco, Normal, Comfort and Sport, along with a dedicated E-Mode for all electric driving plus a Hybrid setting. An off-road package is optional and comes with two further modes; Gravel and Sand, while also adding a front skidplate.

Aesthetically, the R’s differences from its siblings includes not only the R bodykit, but also a black grille, body coloured extended wheel arches, black detailing on the air intakes, around the doors and bumpers, black mirror caps and 20-inch black or matt grey Braga alloy wheels with a burnished finish on the inside. Optional though are 21-inch black or burnished Suzuka alloys, the Lapiz Blue Metallic paint finish derived from the Golf R and T-Roc R as well as 22-inch black/burnished Estoril alloy wheels. 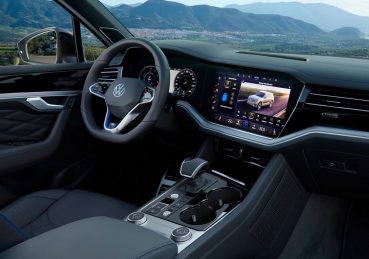 From the options list, buyers can have a 780-watt Dynaudio sound system, diamond-shaped stitching on the seats and doors, Puglia natural leather with Sepang Blue piping and a suite of safety and drive assistance systems such as Night Vision, Front Cross Traffic Alert and Travel Assist adaptive cruise control that allows for partial semi-autonomous driving.

Debuting at the Geneva Motor Show next month, the Touareg R will go on sale in Europe from the second half of this year with South African availability still to be confirmed.