Elantra follows in the wheel tracks of the i20 and Sonata in adopting the marque’s ‘Sensual Sportiness’ design language. In one of its most dramatic overhauls to date, Hyundai, after a relatively short teaser campaign, unveiled the all-new seventh generation Elantra online in Hollywood on Tuesday (17 March) afternoon.

Branded as the “compact sedan the next generation wants to drive”, the Elantra follows in the wheel tracks of the i20 and Sonata in adopting the marque’s ‘Sensual Sportiness’ design language, in addition to becoming the first iteration to feature a coupe-like look.

Heavily influenced by the Sonata stylistically in the form of the jewelled Cascading Grille, tapering headlights, pronounced bootlid and H-type taillights, the Elantra now rides on Hyundai’s K3 platform and measures 4 676 mm in overall length with a wheelbase of 2 720 mm, height of 1 414 mm and width of 1 826 mm. 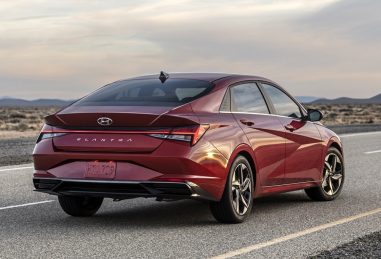 With its dimensions signifying a 56 mm improvement in overall length compared to its predecessor with the wheelbase getting longer by 20 mm, the overall height dropping by the same amount and width increasing by 25 mm, Hyundai claims that the new architecture has resulted in improved handling and less weight, despite not revealing the actual figure.

Offering a choice of alloy wheel sizes ranging from 15 to 17-inches, the Elantra’s interior is more restrained than its exterior, but nonetheless equipped with a dual 10.25-inch display for the infotainment system and the all-digital instrument cluster. Standard though is an eight-inch touchscreen system incorporating Bluetooth Apple CarPlay, Android Auto and voice recognition, with a wireless smartphone charger and eight-speaker Bose sound system being available from the options list. 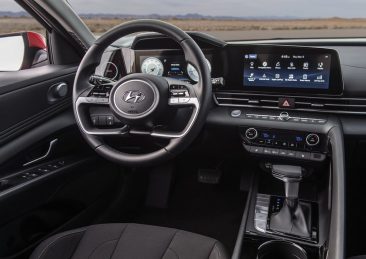 In the United States, the Elantra will initially be powered by a choice of two engines with a more powerful N set to follow later. On all models, power comes from a normally aspirated 2.0-litre petrol that produces 110kW/180Nm, transmitted to the front wheels via Hyundai’s Intelligent Variable Transmission, otherwise known as a CVT.

Debuting though on higher spec derivatives, the hybrid combines the smaller 1.6 GDI engine with a 1.32 kWh lithium-ion battery pack for a combined output of 103kW/264Nm. Mated to a six-speed dual-clutch ‘box, claimed fuel consumption is 4.7 L/100 km with no further details being revealed.

With production set to commence later this year, the Elantra will go on sale in the fourth quarter of this year with sales in South Africa more than likely to start in 2021.