The Thunder mainly receives a series of exterior and interior tweaks.

With recent special editions such as the FX4 in Australia and the Storm in South America, Ford has unveiled yet another limited edition version of the Ranger, this time only for Europe.

Using the Wildtrak as a base, the Thunder mainly receives a series of exterior and interior tweaks, the former consisting of a unique Sea Grey paint finish with red detailing on the grille, black 18-inch alloy wheels, red-and-black Thunder badging at the base of the front doors, blacked-out LED headlight clusters and fog light bezels, as well as black taillight clusters.

Rounding the changes off is an Ebony Black finish for the grille, door handles, skidplates and the sports bar, which also receives red accents. Optionally, buyers can also have a black powder coated Mountain Top sourced roller cover plus a rubberised loadbin. 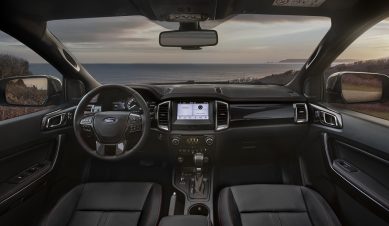 Being based on the Wildtrak, the Thunder comes powered by the 157kW/500Nm 2.0-litre bi-turbodiesel engine paired to the ten-speed automatic gearbox co-developed with General Motors, and with selectable four-wheel-drive.

Limited to 4 500 units, pricing for the Thunder in the United Kingdom, which has received an allocation of 1 400, kicks-off at £32 965 (R740 156) but as mentioned, don’t expect a South African derivative to be offered anytime soon.