Next Ford Focus ST could be a hybrid

ST will never be offered with four-wheel-drive as an all-paw gripping system will be an RS exclusive. With the confirmation last month that it won’t be bringing a RS version of the new Focus to market due to Europe’s pending new emissions regulations, Ford has now revealed that the current ST could well be the last iteration to make wholly use of an internal combustion engine.

In a video interview with Australian media ahead of the model’s market launch this coming Thursday (21 May), Ford Performance’s Head for Europe, Stefan Muenzinger, said while the Blue Oval is evaluating matters ahead of the next ST’s rumoured launch in 2025 or 2026, a switch to hybrid power appears inevitable in order to keep both the moniker and comply with the 95 g/km corporate fleet average emissions target. 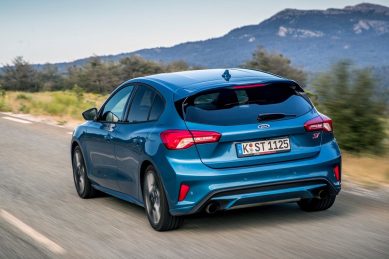 “In Europe as you know there are significant CO2 constraints (and) legislation. Manufacturers must meet CO2 fleet consumption targets, which really puts tremendous pressure on (car manufacturers) as a fleet, to deliver on those targets. I think the answer is somewhat yes,” Muenzinger was quoted by caradvice.com.au as saying.

“If you do a fully conventional RS type product with a CO2 above 200 grams (per kilometre), it just really really hurts you for your fleet compliance. We are looking at what would customers like and what makes sense from a business perspective … but yeah (hybrid) is under consideration, absolutely”.

At the same time, Muenzinger also told the online publication that the ST will never be offered with four-wheel-drive as an all-paw gripping system will be an RS exclusive. “As you know we officially announced there will be no RS based on this Focus architecture … and no there won’t be an all-wheel-drive (ST).  I personally think this car doesn’t need all-wheel-drive because the (electronically controlled mechanical limited slip differential) is a key enabler for traction”.

Unveiled last year, the 206kW/420Nm 2.3 EcoBoost powered ST, which Dearborn claims will get from 0-100 km/h in six seconds regardless of being fitted with the six-speed manual or the new seven-speed automatic gearbox, has, like the regular Focus, been ruled out for South Africa due to slow sales of the generation that preceded it.