Motivation for the AMG E53 comes courtesy of a mild-hybrid 3.0-litre straight-six that punches out 320kW/520Nm. Mercedes-Benz has completed the facelift E-Class range by revealing both the Coupe and Cabriolet derivatives in the early hours of this morning (27 May).

As with the sedan that premiered back in March, the small but noticeable revisions include a restyled grille, new headlights outfitted with full-LEDs or optional MultiBeam LEDs, an updated rear bumper and model bespoke two-piece LED taillights. Rounding the changes off are new alloy wheel designs and four new colours; Mojave Silver, Mojave Silver, Graphite Grey Metallic and designo Patagonia Red. 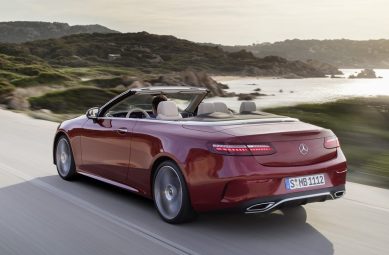 Whereas the cabriolet made its showing in ‘standard’ guise, the coupe was shown in, for now, flagship AMG E53 form whose new aesthetics include the Panamericana grille with its so-called jet-wing front apron, a new rear apron with quad as opposed to dual exhaust outlets, the mentioned LED taillights and five-spoke 19-inch light-alloy wheels with 20-inch alloys in a five twin-spoke design being optional. New the E53’s colour palette is Graphite Grey Metallic and Matte Brilliant Blue Magno, with buyers having the added option of the AMG Night Package or the Carbon Package II.

Once again, the interior is in accordance with that of the sedan with novelties being the upgraded MBUX infotainment system with the standard 10.25-inch dual screens or the optional 12.3-inch display, the newly designed steering wheel and two new material options; light aluminium grained carbon fibre and open-pore grey ash wood.  As before, the cabriolet and coupe can also be furnished with Nappa leather, Artico man-made fibres and conventional leather, plus materials such as walnut and aluminium. 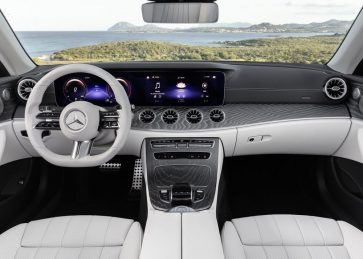 In the case of the E53, the new AMG Performance steering wheel trimmed in leather, Dinamica micro-fibres or a combination of both debuts, along with AMG specific readouts for the MBUX and instrument cluster, sport seats trimmed in Artico/Dinamica with red top-stitching and red seatbelts. Optionally available are the AMG Performance sport seats.

With safety spec mirroring that of the sedan, the powerunits underneath the bonnet are also similar with a broader use of the 48-volt EQ Boost mild-hybrid system being utilised. On the petrol side, the E200 and E300 are powered by the 2.0-litre M254 turbo that produces 145kW/320Nm and 190kW/370Nm respectively, with an additional 10kW/150Nm being added by the EQ Boost system. 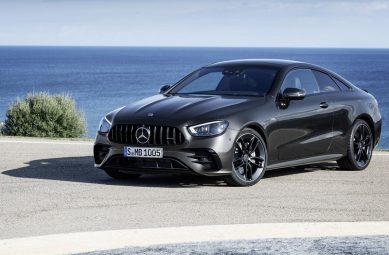 Aside from the AMG, the E450 rates as the only six-cylinder model offered with its mild-hybrid 3.0-litre M256 straight-six churning out 270kW/500Nm. Equipped with the 4Matic all-wheel-drive system as standard, optional on the E200 but not on the E300, the E450 also boasts a more powerful electric motor that provides 16 kW/250 Nm.

On the diesel side, where electrification is eschewed in favour of a new twin selective catalytic reduction system, NOx storage catalytic converter and upgraded particle filter, the entry-level E220d’s 2.0-litre OM 654 oil-burner produces 143kW/400Nm, while the 3.0-litre OM 656 straight-six in the E400d delivers 250kW/700Nm. Similar to the E450, the E400d sends its amount of twist to all four wheels with the E220d having it as an option. Across the range, only a single transmission is offered, the 9G Tronic. 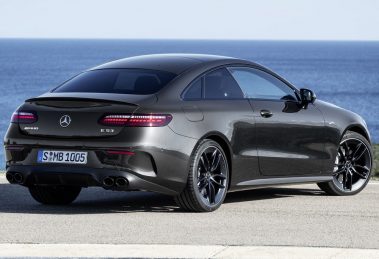 As for the E53, which comes with the three-mode (Comfort, Sport and Sport+) AMG Ride Control+ system as standard along with the AMG Dynamic Select system featuring a first-time Race mode, motivation comes courtesy of a mild-hybrid 3.0-litre straight-six that punches out 320kW/520Nm. A nine-speed MCT is entrusted with delivering the grunt to all four wheels.

With an additional 16kW/250Nm being offered by the EQ Boost system, the E53 will top out at 250 km/h or 270 km/h with the optional AMG Driver’s Package added. Providing stopping power are vented cross-drilled discs utilising a four-piston caliper AMG branded setup at the front and single at the rear. Surprisingly, the 0-100 km/h sprint time was not provided. 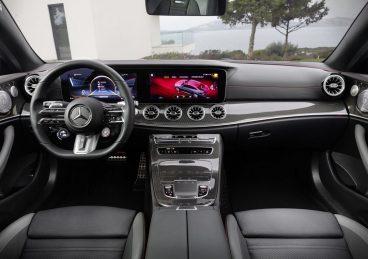 In Europe, sales of the E-Class Coupe and Cabriolet will commence later this year followed by the E53, but expect a South African market debut only in 2021.