Recent opening of factories in Thailand has increased speculation that both will premiere next week. With last month’s leaking of several images allegedly showing the production version of the facelift Toyota Hilux, a fresh report from Brazil has claimed that the eagerly awaited changes will be seen, officially, for the first time next month.

According to motor1.com Brazil, citing a number of outlets in Thailand, the refreshed version of South Africa’s perennial best-selling new vehicle will premiere alongside the updated Fortuner on 4 June.

Although Toyota has not made any mention of the date in question, the recent opening of factories in Thailand after the easing of lockdown regulations attributed to the Coronavirus, has increased speculation that both will premiere next week.

Based on the mentioned leaks, the facelift Hilux will draw heavily from its North American cousin, the Tacoma on the outside, while the Fortuner, seen for the first time last month, will sport a front facia similar to the Raize and even the Japanese market Harrier launched earlier this month. 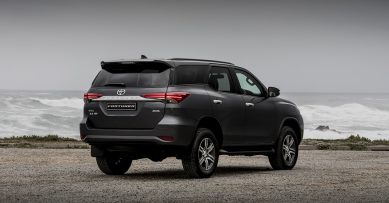 Aside from a new infotainment system and upgraded materials, both are set to undergo significant changes in the safety department with the inclusion of Toyota’s Safety Sense system that is likely to be standard on high spec models.

The biggest highlight though is the speculated upgrading of the 2.8 GD-6 turbodiesel engine from its current 130 kW to 150 kW with torque anticipated to match or possibly even better the five-cylinder 3.2 TDCi used in the Ford Ranger. It remains to be seen though if separate outputs would once again be applied to models equipped with manual and automatic transmissions.

Also on the cards is the possible unveiling of the much vaunted six-cylinder turbodiesel engine earmarked for the Land Cruiser 300, which, if reports are to be believed, could produce 200 kW and feature underneath the bonnet of the Ranger Raptor rivalling GR Hilux.

Details on the Fortuner are even clear-cut, but while it is almost a given that the relative engine upgrades would also apply, don’t expect it to be the recipient of any performance badging if it does become available with the six-pot oil-burner.

With just under seven days left until the alleged unveiling takes place, don’t be surprised if official images or details appear online or on social media in the run-up.