He built a twin-turbocharged, seven-litre Pontiac TransAm in 1990 and set an overall South African Land Speed Record of 372 km/h. In a motorsport career spanning 55 years, Willie Hepburn has built, prepared and raced a total of 31 cars, thus far. We had to add “thus far” because, at the age of 77, Hepburn is by no means finished with matters of making metal move really quickly on wheels.

It all started in 1958, when Willie, an apprentice mechanic, went to work for legendary car tuner Basil Green in Edenvale. “We modified Ford Anglias and Cortinas – in those days, you could race a road car in club events and many of the customers did just that,” Hepburn recalls.

Willie wanted a race car too, but could not afford to buy one, so he created his own. In 1965 he tackled an unusual project, building a 1500 cc Cortina engine into the body of a Morris 1000. The “Mortina” proved disconcertingly fast and Willie drove it to great effect at the Wembley Hotrod track, the Krugersdorp Hillclimb and club races at Kyalami. But he rolled it and it was replaced by a Chevy II, which Hepburn drove in drag races at the Rainbow venue on the East Rand during the late 1960s.

In 1971 he took a road-going 1967 Chevrolet bakkie to the Kyalami Top Speed Runs and amid Ferraris, Lamborghinis, Jaguar E-Types and the like, set the day’s highest speed of 145 miles per hour – 232 km/h.  The 1970s brought the Mazda Rotary to South Africa and Hepburn grabbed the chance to work with a compact, lightweight powerplant that could yield amazing amounts of power.

Between 1975 and 1978 he built, tuned and successfully raced a variety of Mazda RX2 and Capella models in both standard and modified form, winning many Inland Regional and National championship races. In 1979 the powers that be created a Manufacturers’ championship for saloon cars with unlimited modifications and Hepburn built an Opel Rekord V8, while also driving a Chevrolet Chevair in the Group One title chase for standard cars. In 1981 he built a Chevy SS that he raced that year and the next in the Star Modified Saloon Car Championship. “Tiger Wheels sponsored me – I got R1 000 per race victory. A lot of money, at that time. Luckily I won often and took the national title in 1982” he remembers.

In 1983 the Mazda RX-7 arrived and Hepburn rekindled his relationship with rotary engines. For the next three years he raced RX-7 examples in both standard and modified form, winning the 1984 Group One title. In 1984 the Mitsubishi Tredia arrived here and the turbocharged flagship model proved an excellent race car in the all-new Stannic Group N championship for standard cars.

“The Mitsubishi was great, but it handled horribly, with far too much power going through the front wheels on road-going tyres,” he recalls. His Tredia was destroyed in 1985 when it lost its brakes at the end of the Kyalami straight, passed eight other cars before Crowthorne Corner and rolled many times.

The next two years Willie raced a Mazda 3 in the ever-growing Stannic Group N series, winning his class on many occasions. He returned to his jungle of choice in 1988, running a V8-engined Ford Sierra, fondly nicknamed “Animal” in the WesBank Modified Saloon Car title chase. He also raced a Ford Laser in the Group N series.

A long-term relationship with Opel started in 1989 and 1990, when Hepburn built five V8-engined Opel Rekords for the WesBank Modified title chase. He drove one himself, while also running a successful privateer Opel Kadett Superboss. 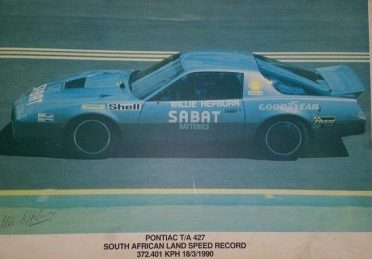 In 1990, Willie built this twin-turbocharged, seven-litre Pontiac TransAm in 1990, and set an overall South African Land Speed Record of 372 km/h on the N3 highway near Villiers. To this day, it is the highest speed ever recorded by a road legal car in South Africa.

In a change of pace, he built a twin-turbocharged, seven-litre Pontiac TransAm in 1990 and set an overall South African Land Speed Record of 372 km/h on the N3 highway near Villiers. It is still the highest speed ever recorded by a road legal car in South Africa.

He kept racing the Rekord in Modified races from 1991 to 1999, plus a number of outings in the Group N Superboss. In 2000 he ran a Chevrolet Camaro in the WesBank V8 Saloon Car championship, while also visiting the US to take a Ray Cohen McLaren to two victories at the Seattle Raceway.

The Camaro served until 2003, becoming a blueprint for four more customer cars, all built at Willie’s workshop.
2005 and 2006 saw a Mustang in the WesBank V8 Saloon Car title chase, while Hepburn dug out the Rekord for club racing purposes.  In 2007 – the year provisionally set for Hepburn’s retirement – he built a Chevrolet Corvette V8 for the WesBank title chase, dubbed the “Flying Naartjie” due to its lurid orange colour.

He raced the Corvette until 2013 when he won a race at Killarney in the Western Cape. He was 71 – to this day the oldest person to win a national championship race in South Africa. In between, Willie won a number of Historic Car races in the venerable Rekord and a Penske Camaro. The Rekord has also done duty at the Simoa Hillclimb since 2013.

A huge crash with a Ford Capri Perana at Zwartkops in 2014 left Willie with cracked ribs and a temporary visual impairment. He recovered to race the Capri, and received Motorsport South Africa’s ultra-rare Lifetime Achievement award at the end of the year. Since then, Willie has run the Rekord in Super Saloon and Historic Car races. “I never went racing thinking I was a superb driver, but I knew I could make cars go really well – for me, that still is the challenge of racing. That is why I never raced for a factory team – I could never race a car without preparing it myself,” he says.

That still holds true – Hepburn is currently recreating the Mortina, while building a Studebaker Lark, a Mazda RX-7 and a Chevrolet Firenza CanAm. “I could never stop – racing is what I do, and that could never change,” he says.