Judging by the gear lever, the free-breathing three-pot resides underneath the bonnet of the pictured model. While allegedly only due for unveiling in the third or fourth quarter of this year, an Opel dealership has seemingly jumped the gun by posting images of the all-new Corsa F on its Facebook page.

Devoid of any badging and currently serving as a ‘sneak preview’ model, the example in question appears to be equivalent to the top-spec GS Line sold in Europe as evident by the two-tone orange-and-black paint finish, black alloy wheels and a neatly integrated boot spoiler.

On the inside, the interior draws parallels with that of the already discontinued Corsa E such as the design of the gear lever, the buttons on the piano key black finished centre console and the thickly wrapped leather multi-function steering wheel resplendent with voice recognition and cruise control switches. The rest of the cabin is brand-new though with the most prominent being the all-digital instrument cluster and what appears to be the seven-inch Multimedia Navi touchscreen infotainment system. On the Old Continent, a bigger ten-inch display is offered, but it remains to be seen whether this would be offered.

Although exact spec has not been confirmed, the Blitz’s website makes reference to tech such as Forward Collision Alert with Automatic Emergency Braking and Pedestrian Detection, the Matrix IntelliLux LED headlights and Adaptive Speed Control, while from the interior image, just visible on the buttons for the climate control, is the heated seat symbol to the left of temperature control knob.

Riding on parent company PSA’s EMP1 platform shared with the Peugeot 208, the Corsa, in its lightest form, ticks the scales at 980 kg, a claimed 108 kg less than the Corsa E, with models in Europe offering a choice of three engines; a normally aspirated three-cylinder 1.2 that makes 55kW/118Nm, the familiar 1.2-litre PureTech turbo triple in two states of tune; 74kW/205Nm and 96kW/230Nm and lastly the 75kW/250Nm 1.5 BlueCDTI turbodiesel. 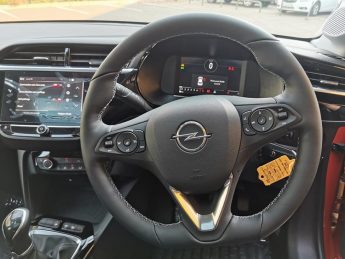 Judging by the gear lever, the free-breathing three-pot resides underneath the bonnet of the pictured model as it is the only petrol derivative to come with the five-speed manual ‘box. A six-speed manual or eight-speed automatic can be had on the low output 1.2, with the latter being standard fare on the 96 kW model.

A five-speed manual is also standard on the diesel, but while the local line-up remains to be confirmed, neither it nor the all-electric, 100kW/260Nm Corsa-e are scheduled to appear on the local market. Instead, it will be an all petrol affair likely to include all three of the mentioned drivetrain options.

With pricing for the Corsa E, which remains available until stock runs-out, starting at R276 000, expect the sticker price for the F to kick-off at around R300 000.