The most prominent changes though are underneath the Mach 1’s skin where the main Shelby additions feature. Ford has officially ended months of speculation and teasers regarding the revived Mustang Mach 1 by revealing the first pony car to wear the iconic moniker in 16 years.

The effective replacement for the Steve McQueen Bullitt tribute edition, the Mach 1 slots-in between the regular GT and the Shelby GT350, but instead of replacing the latter as eluded to on numerous occasions, incorporates a number of exterior features while keeping the normally aspirated 5.0 Coyote V8.

In typical Mustang fashion, the Mach 1 comes with a satin black strip on the bonnet and at the base of the doors, which are outlined by a choice of three colours; White, Red and Orange, the latter part of an appearance package. A total of eight exterior colours are offered; Oxford White, Shadow Black, Iconic Silver, Fighter Jet Grey again part of the appearance package, Grabber Yellow, Twister Orange, Velocity Blue and Race Red. 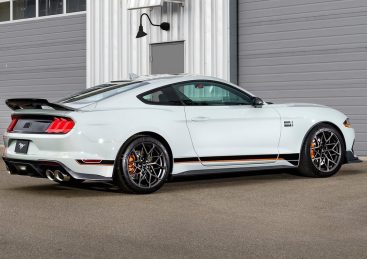 Compared to its exterior, the Mach 1’s interior revisions are small and includes a Dark Spindrift instrument cluster with aluminium inserts, the same white cue ball knob on top of the gear lever as the Bullitt, Ebony trimmed seats on models specified with leather upholstery, Mach 1 branded door sill plates, a new ‘splash screen’ for the 12.3-inch digital instrument cluster, commemorative chassis number badging and Mach 1 plaque on the dashboard instead of the traditional Mustang logo.

The most prominent changes though are underneath the Mach 1’s skin where the main Shelby additions feature. These include the same rear subframe, stiffened-up bushes and toe-link as the GT500, the oil filter adapter, intake manifold and oil cooler as the GT350 and the same transmission oil cooler as the latter.

Taken from the Performance Pack optionally fitted to the GT is a longer underbody protection pan with unique airfoils to aid brake cooling and the same brake booster. As part of the Handling Pack, the Mach 1 gets wider wheels, a Magnetic gloss Gurney flap, extended splitter, tyre spats from the GT500 and new front wheel lip mouldings. 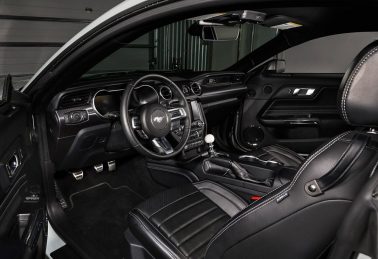 As indicated, the Mach 1 keeps hold of the normally aspirated V8 that does duty in GT, but with power raised from 343kW/569Nm to the same 358 kW as the Bullitt with torque remaining as is. Carried over from the GT350 is the six-speed manual gearbox with rev-matching function, although for the first time, a ten-speed automatic can be specified with the inclusion of the self-shifter resulting in the fitting of a second oil cooler and new torque converter. Unlike the manual, the automatic does without the Handling Pack. No performance figures were announced.

In the US, sales are set to commence next year but despite being offered with right-hand-drive, the Mach 1 is unlikely to replace the Bullitt in right hooking markets.