Crowned European and World Car of the Year last year, Jaguar has refreshed the all-electric I-Pace less than two years after its international unveiling.

Its most recent accolade being South Africa’s Car of the Year, the I-Pace’s visual enhancements are subtle by being limited to a new Bright Pack option that sees the inclusion of an Atlas Grey diffuser and mirror caps, Noble Chrome grille and satin chrome window trim, a switch from 18 to 19-inch alloy wheels, an Atlas Grey paint option for the grille if the Bright Pack is not specified, and three new colours; Eiger Grey, Portofino Blue and Caldera Red. 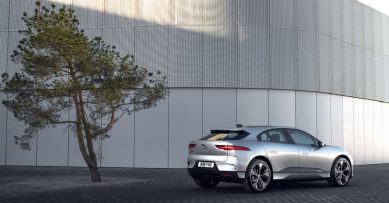 Inside, the 12.3-inch digital instrument cluster and smaller five-inch climate control display remain, but the ten-inch Pivi Pro touchscreen infotainment system gains new software, over-the-air updates, as well as a new display said to have been inspired by the latest smartphones. A wireless smartphone charger is optional together with wireless Apple CarPlay and Android Auto.

In spite of the climate control display remaining unchanged, it now comes with Jaguar’s PM2.5 filtration system, which is claimed to filtrate the cabin before the start of a journey in addition to removing ultra-fine particles. With higher-end models receiving the option of a new 16-speaker Meridian sound system, new specification items include a 3D surround view camera system and the ClearSight digital rear-view mirror that debuted on the updated Range Rover Evoque. 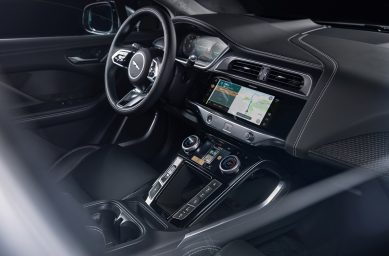 As for motivation, the 90 kWh lithium-ion battery pack has been retained with outputs of 294kW/696Nm, but with reduced charging time in the form of a new on-board 11 kW charger claimed to add 53 km of range. Total charging time from 0-100% is 8.6 hours. According to Jaguar, using a seven kilowatt wallbox will take 12.7 hours, while the times for a 50 kW and 100 kW point are 15 min with added ranges of 62 and 126 km. The final claimed range between trips to the plug is 470 km.

Despite being offered in Europe already, the updated I-Pace is set to arrive on local shores towards the end of this year.