Audi brings the knife out on Q5 Its unveiling having taken place three years ago, Audi has given the second generation Q5 a mid-life refreshment ahead of its market debut later this year.

Aside from the base model, the Q5 retains the Advanced designation as mid-range grade that boasts chrome exterior detailing, and the sporty S line which features a unique bodykit and Audi Sport alloys up to 21-inches. 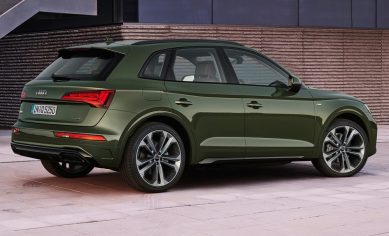 Inside, the 10.1-inch MMI Plus infotainment system benefits from the new MIB 3 software, while the 12.3-inch Virtual Cockpit Display instrument cluster receives three new graphic displays. A Heads-Up Display can be had as an option. Safety and driver assistance tech has been sharpened-up too with the Pre-Sense City Collision Avoidance system now being standard, along with Lane Departure Warning, Rear Cross Traffic Alert and Park Assist.

Underneath the bonnet, the likely volume selling 2.0 TDI engine in the 45 designated model receives a 12-volt mild-hybrid system, and punches out 150 kW as opposed to 140 kW, with torque remaining unchanged at 400 Nm. Drive is routed to all four wheels via a seven-speed S tronic ‘box.

The rest of the line-up, although not detailed in full, will comprise two further 2.0 TDI models, two variants of the 2.0 TFSI, likely to be the 180kW/370Nm 45 TFSI and the hybrid 55 TFSI e  that makes 270kW/500Nm, and a single 3.0 TDI V6 that makes reference to the 210kW/620Nm 50 TDI. As ever, the performance SQ5 will also benefit from the updates, but only arrive at a later stage. All four-cylinder models are equipped as standard with the mentioned S tronic and the V6, including the SQ5, with an eight-speed Tiptronic. 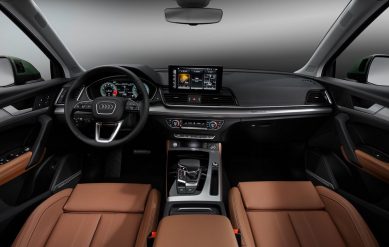