Designed from the ground up as a “stripped back, utilitarian, hard-working 4x4 engineered for modern day compliance and reliability". With Land Rover having called time on the Defender four years ago only to reveal the all-new model last year, a British firm has now released its interpretation of the original.

Founded three years ago by Chairman Jim Ratcliffe, Ineos Automotive, an offshoot of the Ineos Group petrochemical company, came as a result of Solihull declining to sell the rights and tooling of the Defender to the billionaire off-road enthusiast in 2016, which has now resulted in the creation of the Grenadier.

Also available as a double cab pick-up along the lines of the Defender 130, the Defender 110 inspired Grenadier is named after a pub in London where Ratcliffe came up with the model, and according to CEO Dirk Heilmann, will be tested over 1.8-million kilometres throughout the next year.

“Showing the design now allows us to focus on the critical next phase of the vehicle’s development, testing its capability and durability. Most manufacturers would hold back, but we are a new business, building a new brand, and we want to take people with us on this exciting journey. From today the covers are off. Testing ‘in plain sight’ without the need for camouflage wrapping, foam blocks or fake panels is an added benefit,” Heilmann said. 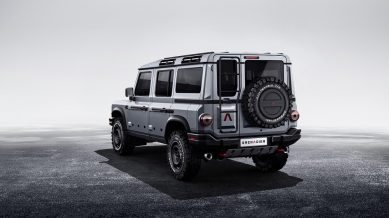 Designed from the ground up as a “stripped back, utilitarian, hard-working 4×4 engineered for modern day compliance and reliability,” the Grenadier will be made in partnership with famed Austrian firm Magna Steyr, manufactures of the Mercedes-Benz G-Class, BMW Z4 and Toyota Supra, and built in Wales from next year using a traditional ladder-frame and equipped with a low range transfer case.

“The Grenadier project started by identifying a gap in the market, abandoned by a number of manufacturers, for a utilitarian off-road vehicle.  This gave us our engineering blueprint for a capable, durable and reliable 4×4 built to handle the world’s harshest environments. But it had to look the part as well,” Ratcliffe said.

Styled by Ineos’ Head of Design, Toby Ecuyer, the Grenadier will reportedly be motivated by a BMW-sourced 3.0-litre B57/B58 turbodiesel or petrol engine, linked to a ZF made eight-speed automatic gearbox. No power or torque figures were released. A locking centre differential will however feature as standard.

In an interview with Britain’s Autocar,  Ecuyer confirmed that the Grenadier had been “shaped” and benchmarked against the likes of the Ford Bronco, Toyota Land Cruiser and Hilux, Nissan Patrol, Jeeps, Land Rovers and even Unimogs in creating an “extremely capable but also very honest and uncomplicated” vehicle.

Along with its design, the Grenadier is made mostly out of aluminium, high strength steel and other composites, but according to Heilmann, is set to be heavier than the Defender 110 as a result of its drivetrain and more standard equipment. As it stands, Ineos’ set weight is 2.4 tons but in prototype form, it allegedly ticks the scales at 80 kg more.

“We’ve had to learn that aluminium isn’t always the best choice for strength and crash purposes so we’ve chosen the right materials for the right jobs,” Heilmann told the publication, admitting that the impact of Covid-19 had resulted in the project falling behind schedule.

“For now, the time-critical areas are going well. Our key suppliers – people like our axle partner in northern Italy – are with us. The challenge is to get the components together and have them properly tested,” he said.

Key markets will include Europe and North America initially, followed by Australia, Asia and Africa.