Ford has kept the 2.2 TDCi engine, but opted to pair the new six-speed self-shifter with the 2.0-litre EcoBlue oil-burner. Having benefitted from a specification upgrade last year, Ford has now not only expanded, but finally included an automatic gearbox to the Tourneo Custom range.

Coinciding with the ‘box, the local line-up also ditches the smartphone keypad inspired dashboard of the previous generation Fiesta, for the same layout plus touchscreen infotainment system that debuted on the European model three years ago. 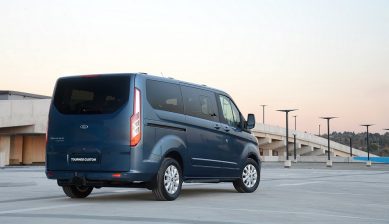 Offered on the Trend and flagship Limited, the system comes with Ford’s SYNC 3 software as well as Apple CarPlay and Android Auto, and measures four-inches on the former and eight on the latter, with both model coming with no less than eight USB ports, an optional 230-volt power outlet, a new instrument cluster and steering wheel, plus gloss black inlays and more seat padding.

Although no changes have taken place externally, the Tourneo can now be had with Adaptive Cruise Control as well as improved LED headlights and automatic model exclusive 17-inch alloy wheels. Both trim grades benefit from a tyre pressure monitoring system with the rest of the standard specification sheet continuing unchanged.

Up front, Ford has kept the 2.2 TDCi engine for manual models, but like in European, opted to pair the new six-speed self-shifter with the 2.0-litre EcoBlue oil-burner that comes with an auxiliary 21-litre tank containing the AdBlue urea solution that is sprayed into the exhaust system in order to reduce NOx levels. 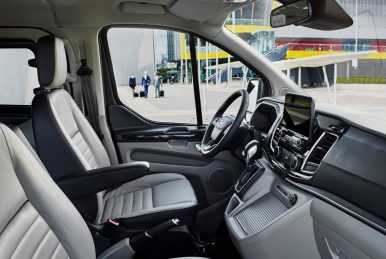 Essentially the same engine that does duty in the Ranger, but without the AdBlue system, the single turbo powerunit produces 96kW/385Nm in the Trend and 136kW/415Nm in the Limited, with the box featuring a manual override as well as a Sport mode. Like the manual, drive is send to the front wheels.