Compared to the conventional Corolla hatch, the Cross is 85 mm longer, 185 mm higher and 35 mm with the wheelbase remaining unchanged. With little bar a single spy image two months ago having been revealed, Toyota, in the early hours of Thursday morning (9 July), unveiled the all-new Corolla Cross in Thailand as its latest crossover/SUV entrant.

The second model to sport a crossover-like take on one of its mainstream models after the Yaris Cross debuted in April, the Corolla Cross rides on the same TNGA-C platform as the ‘standard’ model, but measures 4 460 mm in overall length with a wheelbase of 2 640 mm, height of 1 620 mm and width of 1 825 mm. 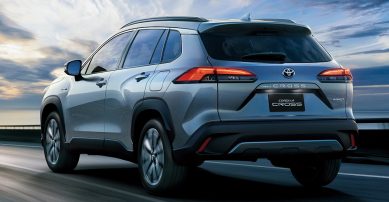 Compared to the conventional Corolla hatch, the Cross is 85 mm longer, a substantial 185 mm higher and 35 mm with the wheelbase remaining unchanged. Somewhat surprisingly, no details regarding the ground clearance was revealed, however, the overall boot space with the rear seats up is rated at 487-litres but shrinks to 440-litres with the spare wheel beneath the boot board selected.

Sporting a more chunkier look than the Corolla with its styling bearing almost no relation, the front being more reminiscent of the Lexus UX from some angles, the Cross will be equipped with either 17 or 18-inch alloy wheels as well as ventilated disc brakes all around, with a MacPherson strut front suspension and a torsion-beam at the rear being highlights of what resides underneath. 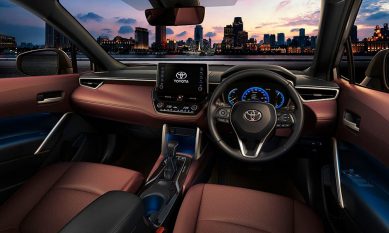 Despite not divulging details about the interior, apart from describing it as “spacious”, “comfortable” and with “ample head clearance”, Toyota did confirm the drivetrain which in Thai guise will consist out of a conventional 1.8-litre petrol outputting 103kW/177Nm and a hybrid that combines the same engine with a 53 kW electric motor for a total system output of 98kW/142Nm. Both engines are paired to a CVT with drive going to the front wheels. Claimed consumption is 6.5 L/100 km for the former and 4.3 L/100 km for the latter.

Set to fill the gap between the Yaris Cross and C-HR, the Corolla Cross will go on sale in Thailand later this month, but at present, it remains to be seen whether Toyota South Africa would bring it to market either this year or possibly in 2021.