Splitter only adds to the wide scale use of carbon fibre which extends to the bonnet, bumpers, roof, wings, tailgate and side skirts. Seen as far back as 2017 undergoing testing before having its arrival confirmed by 2020 less than 12 months later by CEO Tobias Moers in an interview with caradvice.com.au, Mercedes-AMG has officially detailed the eagerly awaited AMG GT R Black Series.

The first model from Affalterbach to wear its most hardcore moniker since the previous generation C-Class based C63, the Black also rates as the most powerful V8 engine Mercedes-Benz ever made, in addition to being one of the fastest.

With the emphasis skewed towards all-out performance, the Black is also lighter than the conventional GT and GT R, and sports several adaptions taken from the GT3 and GT4 race cars. Visually, the gloss black Panamericana grille has been enlarged and a carbon fibre splitter added to the base of the front bumper. 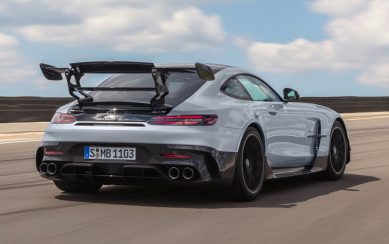 Working in combination with the double rear diffuser as well as the massive carbon rear wing, whose upper rear flap can be adjusted by up to 20 degrees, the splitter only adds to the wide scale use of carbon fibre which extends to the bonnet, bumpers, roof, wings, tailgate and side skirts.

As well as larger cooling vents behind the front wheel arches and on the rear wings, the Black receives quad exhaust outlets integrated into the diffuser, thinner glass for the windscreen and rear window, new side blades also made out of carbon fibre, a bespoke Magmabeam paint finish and 10-spoke forged matte black alloy wheels measuring 19-inches at the front and 20-inch at the rear that are wrapped in Michelin Pilot Sport Cup 2 R MO tyres designed specifically for it by the French firm. Somewhat surprisingly, no details regarding the weight loss compared to the GT R was revealed.

Along with its exterior differences, the chassis and dynamics of the Black have been extensively reworked, revised and in some areas, replaced with components unique to it. These alterations include a carbon fibre dual adjustable torsion bar front axle, a wider track, the same albeit updated adaptive adjustable damping coil-over suspension as the GT R, a carbon fibre driveshaft and anti-roll bars, carbon ceramic brakes and an almost completely sealed underbody which, when combined with the mentioned aerodynamics, generates up to 400 kg of downforce at 250 km/h. 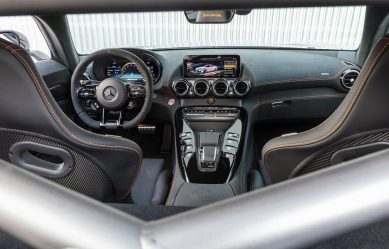 Changes have also been carried out on the seven-speed DCT gearbox in the form of a so-called torque tube made out of carbon fibre weighing 13 kg, which AMG claims creates and “extremely flexurally and torsionally stiff connection between the engine and the transmission”. On top of this, the cooling system has been upgraded and the ratios altered.

The updates don’t stop there and stretches to the AMG Traction Control system which has been recalibrated to feature nine levels of rear wheel slip. What’s more, the splitter can be adjusted manually when in Street or Race modes, while the Electronic Stability Programme can be switched off completely, but only when in the confines of a racetrack. 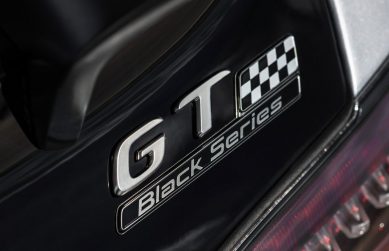 Of course, the main highlight resides underneath the bonnet where the flat-plane crank 4.0-litre bi-turbo V8 has been upgraded from 430kW/700Nm in the GT R to 537kW/800Nm. Equipped with a new compressor, a different exhaust manifold and new camshafts, the Black will get from 0-100 km/h in 3.2 seconds and hit a top speed of 325 km/h. According to AMG, the 0-200 km/h sprint takes a mere nine seconds.

No pricing as so far been announced with availability for South Africa also unknown at present.