Boost turned down but also up for new Porsche 911 Turbo Having made the surprise decision to launch the 992 generation Turbo S back in March, Porsche has now taken the covers off of the ‘standard’ 911 Turbo that will once be offered as either a coupe or a cabriolet. 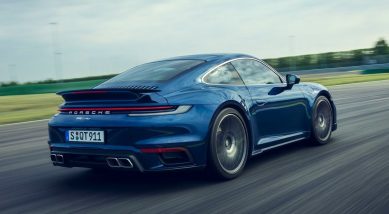 Officially plugging the gap between the Carrera 4S and the Turbo S left vacant until now, the Turbo retains its sibling’s twin-turbocharged 3.8-litre flat-six engine, but with power and torque reduced from 478kW/800Nm to 427kW/750Nm. Despite this, the engine still pumps out 29kW/40Nm more than the 991.2 Turbo as a result of two new VTG turbos equipped with an electronic wastegate bypass valve, upgraded cooling system and new piezo injectors.

With the mentioned outputs also matching that of the 991.2 Turbo S, the 992 Turbo will get from 0-100 km/h in 2.8 seconds, a tenth slower than the Turbo S, and top out at 320 km/h. As ever, drive is routed to all four wheels via a revised eight-speed PDK gearbox.

Differing little from its senior sibling on the outside, the Turbo nonetheless comes with a 42 mm wider track than the 991.2 in addition to a new rear axle, improved Porsche Traction Management system that sends more torque to the front and the optional Dynamic Chassis Control system with hydraulic active anti-roll bars. 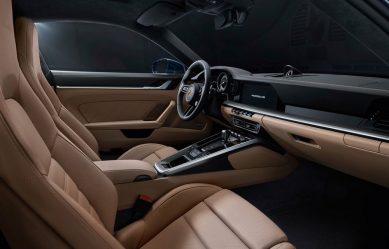 Optionally fitted with the Porsche Active Suspension Management (PASM) system that lowers the ride height by 10 mm, the Turbo rides as standard on 20-inch alloy wheels with 21-inches utilised at the back, while also coming with upgraded cast iron brakes measuring 408 mm at the front and 380 mm at the rear with the discs finished in red. Optional though are the Porsche Ceramic Composite Brakes complete with a ten-piston front caliper setup.

While the interior is carried over from the Turbo S, buyers have the added option of the Sports Package, Black Pack and Carbon Pack as well as the Lightweight Design Pack that reduces the weight of the coupe by 30 kg in that the rear seats are removed together with some of the sound deadening materials, and the front seats replaced with special lightweight bucket chairs. Yet another option, and a first for the Turbo, is the sports exhaust system with quad outlets.

Having already priced the Turbo S at a smidge over R3.5-million, the Turbo is expected to be closer if not under the R3-million mark, but so far, it has not been confirmed for South Africa yet.