Magnite would have formed part of the Datsun portfolio, but ultimately became a Nissan. Positioned below the Kicks as Yokohama’s smallest SUV/crossover, the Magnite adopts a number of styling traits from its siblings, but from the front, appears to have more in common with the radical GT-R LM Nismo that raced at the 24 Hours of Le Mans five years ago.

Riding on a spin-off of the Renault Kwid’s CMF-A platform, known as CMF-A+ used by the Triber and soon, the Kiger, the Magnite, according to reports, would have formed part of the Datsun portfolio, but ultimately became a Nissan due to the budget marque’s dwindling operations in previously identified key markets.

Sporting a single-piece, sweptback headlight design, oversized wheel arches with black cladding, a grille not only inspired by that of the GT-R LM but also clearly from the Datsun stable, plus vertical daytime running LEDs integrated into the flanks of the bumper, the concept also sports silver with red accented front and rear skidplates, off-road tyres, satin silver roof rails and a flat rear facia inspired to a degree by that of the Kicks. 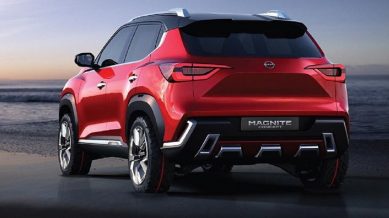 Set to measure below the crucial four metre overall length mark, the Magnite’s interior will, according to Nissan, come with an eight-inch touchscreen infotainment system, cruise control, a surround-view camera system and possibly even automatic climate control. However, expect the array of features to depend on the respective trim level.

Although Nissan remained mum on the Magnite’s technical details, Autocar India reports that at least two variants of the 1.0-litre three-cylinder engine will be used; the 52kW/96Nm normally aspirated and the turbocharged engine that produces 74kW/160Nm. Transmissions are likely to consist out of a five-speed manual, five-speed automated manual (AMT) and possibly a CVT for the turbo. Drive will be routed to the front wheels only.

At present, the Magnite is set to go on sale sometime next year, but chances are that the actual production model could be unveiled before then. Projected to retail from Rs 525 000 (R116 303) in India, no word from Nissan South Africa has been made regarding local market availability.