One of the most innovative features, is the intelligent six-speed manual transmission that does without a clutch pedal. After a prolonged teaser campaign that started shortly after the concept’s debut at the Delhi Auto Expo in February, Kia has now officially revealed the eagerly awaited Sonet SUV.

The sister model to the Hyundai Venue, the Sonet serves as the South Korean marque’s smallest and new entry-level offering below the Seltos with the final design, as indicated by the series of teaser sketches, being little watered down for the concept.

Set to be build alongside the Seltos at the Anantapur Plant in the state of Andra Pradesh, the Sonet, which is aimed at generation Z buyers and millennials according to its President and CEO, Ho Sung Song, incorporates Kia’s latest Tiger Nose grille derived from the Sorento and K5, while the LED headlights resembles those of the latter with the knurled finish of the grille said to have been inspired by the design of India’s stepwells.

The rear facia meanwhile draws heavily from the Rio in the design of the taillights, while also getting a faux skidplate, wraparound window and in the case of the range-topping GT-Line shown, 16-inch crystal cut alloy wheels. Rounding the go-anywhere persona off is black cladding around the wheel arches and at the base of the doors, with buyers set to have the option of eight monotone colours and three two-tone hues. 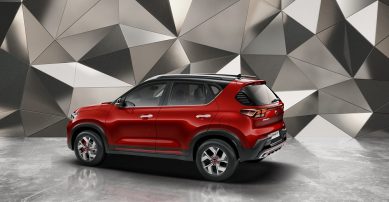 Despite not divulging any of the Sonet’s dimensions, although it is known to fall below the crucial four metres in overall length mark, Kia does state that the interior “offers ample, ergonomic space for all passengers” in addition to being “sophisticated, lively, modern, dynamic and bold”.

In the case of the GT-Line, the dashboard is highlighted by a freestanding 10.25-inch touchscreen infotainment system with Apple CarPlay, Android Auto, Hey Kia activated voice control and satellite navigation, flanked by a semi-digital instrument cluster with a 4.2-inch display.

Said to have undergone 100 000 km of testing in South Korea and India, motivation for the Sonet will come from three engines; a normally aspirated 61kW/115Nm 1.2-litre petrol, the 88kW/172Nm 1.0 T-GDI used in the Venue and the 85kW/260Nm 1.5 CRDI turbodiesel that debuted in the South African-spec Seltos last month.

In spite of being front-wheel-drive only, five transmission options will be offered, the first being the so-called Intelligent six-speed manual that eschews the clutch pedal for an electronically activated unit that uses sensors to detect the movement of the gear lever, before engaging the clutch as the driver shifts manually up or down.

According to Kia, dropping the clutch pedal means a prolonged clutch life, a smoother ride as a result of there being no slipping of the pedal on release and less driver fatigue, mainly in stop-and-go traffic. For now, it would seem that the ‘box will only be offered on the T-GDI.

On the 1.2 though, a conventional five-speed manual it utilised with the diesel receiving a three-pedal six-speed manual as standard. Optional on the oil-burner is a six-speed automatic with the self-shifting option on the T-GDI being a seven-speed dual-clutch.

Based on prior reports, and on comments of Kia South Africa CEO Gary Scott earlier this year, the South Africa bound Sonet is expected to command a premium over the Venue, which currently retails from R285 000. Expect pricing therefore to possibly start at around R290 000 to R295 000.