ID.4 will initially only be offered with rear-wheel-drive with a 225 kW all-wheel-drive joining in 2021. With just over a year having passed since the introduction of the ID.3, Volkswagen has expanded its dedicated range of all-electric ID vehicles with the long awaited reveal of the bigger ID.4.

Billed as a crossover and riding on the electric optimised MEB platform, the ID.4 follows the same design route as its Golf-sized sibling, but within the Volkswagen line-up, aligns closer to the Tiguan Allspace than with the standard five-seat model. Positioned between both, the ID.4 measures 4 584 mm in overall length with a wheelbase of 2 766 mm, height of 1 635 mm and width of 1 852 mm.

Despite being 117 mm shorter in overall length and 23 mm in the wheelbase department than the Allspace, while also being 48 mm lower and 13 mm wider, the ID.4 boasts the same luggage capacity with 858-litres on offer with the rear seats up and 1 818-litres with the rears dropped. Like the ID.3, the ID.4’s interior incorporates a minimalist design with the analogue instrument cluster being replaced by a 5.3-inch digital display known as the ID Cockpit, while most of the functions have been located to the ten-inch Discover Pro infotainment system, which can be upgraded to the twelve-inch Pro Max as part of the Statement pack. As well as Apple CarPlay and Android Auto, both systems feature over-the-air updates, the Hello ID voice activation command, Gesture Control and App Connect.

In terms of power, only a rear-mounted 82 kWh battery pack will be offered initially, with its outputs standing at 150kW/309Nm, thus resulting in a claimed range of 400 km and 0-100 km/h in 8.5 seconds. Volkswagen has however confirmed that an all-wheel-drive model will be added next year with a reported output of 225 kW. 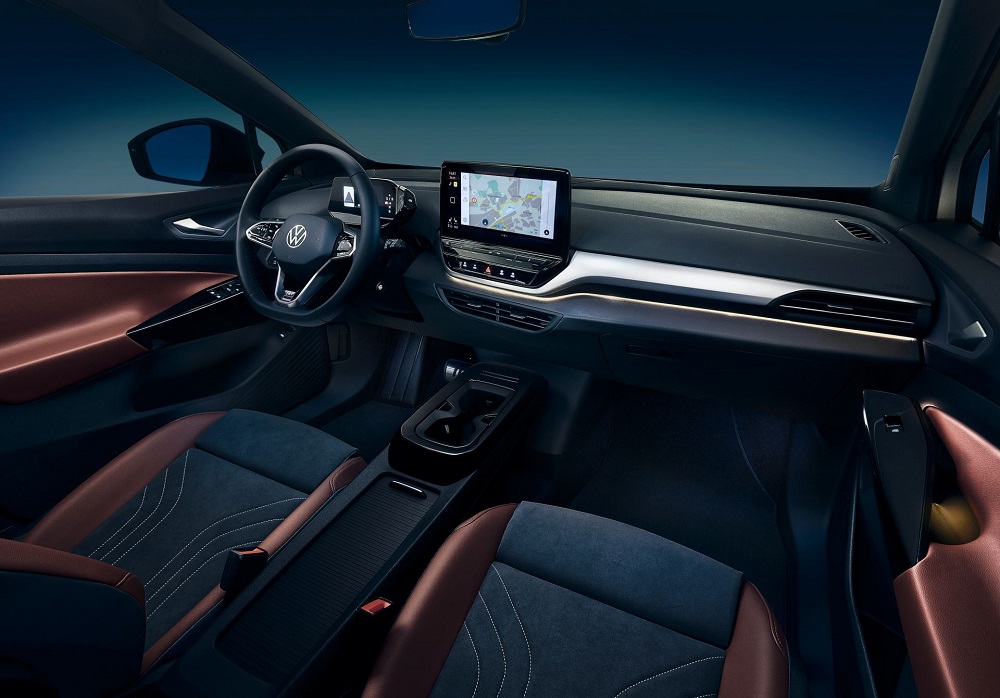 With the 11 kW on-board charger plugged-in, charging time from 0-100% takes seven hours with a range of 53 km possible after 60 minutes. When plugged-in to a fast charging 125 kW outlet though, the battery takes 38 minutes to be charged from five to 80%.