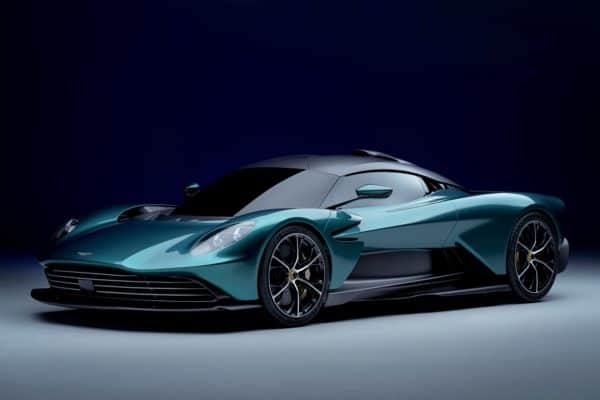 Styling has been tweaked from the pre-production model shown last year.

Having done the rounds as a concept since 2019 when it premiered as the AM-RB 003 at the Geneva Motor Show, Aston Martin has officially taken the wraps off of the production version of the Valhalla hypercar.

Unveiled in pre-production guise just over a year ago, the now buyer ready Valhalla has had its styling revised to include a wraparound “one-piece” lower air intake and newly designed LED headlights. The overall silhouette and rear facia have however been retained without change.

Said to weigh less than 1 550 kg as a result of the body and actual tub being made out of carbon fibre, the Valhalla, which will slot-in below the Valkyrie as Aston’s most accessible hypercar for now, is claimed to produce 600 kg of downforce at 240 km/h thanks to not only the design of its body and aerodynamics, but also the rear wing and twin venturi tunnels on either side of the diffuser.

Equipped with what Gaydon refers to as adaptive spool valve dampers that adjusts depending on whether a road or track is detected, as well as variable springs and a pushrod front suspension originating from the brand’s return to Formula 1 this year, the Valhalla also boasts carbon ceramic brakes with brake-by-wire technology and model bespoke 20-inch alloy wheels at the front and 21-inches at the rear wrapped in tyres made specifically for it by Michelin.

Despite not revealing the interior, the Valhalla’s cabin is said to be more spacious than that of the Valkyrie with mentioned features comprising a touchscreen infotainment system with Apple CarPlay and Android Auto, dual-zone climate control, adjustable pedals, Adaptive Cruise Control, Autonomous Emergency Braking, Forward Collision Warning, Blind Spot Monitoring and a reverse camera.

The biggest difference from the pre-production Valhalla though is the powerunit, where Aston has dropped the electrified twin-turbo 3.0-litre V6 engine for what it says is a bespoke twin-blown 4.0-litre V8, which is however believed to be the same Mercedes-AMG made unit used in the Vantage.

Tweaked to deliver 552 kW on its own, Aston has paired the V8 up with two electric motors mounted on the front and rear axles, which produce 150 kW in combined form. In total though, the plug-in hybrid setup punches out 699kW/1 000Nm that translates into a claimed top speed of 330 km/h and 0-100 km/h in 2.5 seconds.

Hooked to an eight-speed dual-clutch gearbox with an electronic limited slip differential included, the Valhalla has a claimed all-electric range of 15 km with its top speed in electric mode being limited to 130 km/h.

In spite of not revealing pricing details, unsurprisingly, the Valhalla will be offered in both left-and-right-hand-drive with Aston projecting a lap time of six minutes 30 seconds around the Nürburgring.