Aside from taking leave of the rear seats, the six-speed manual gearbox's ratios have been adjusted and torque increased by 30 Nm. 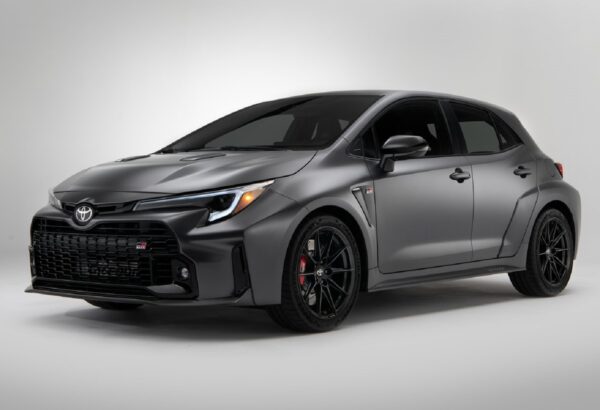 Morizo Edition will only be available in two colours; Windchill Pearl and Matte Grey

With two months having passed since the debut of the GR Corolla, Toyota, this past week, introduced an even more hardcore model said to have been designed solely for the race track.

Called the Morizo Edition in recognition of the racing alias used by Toyota President and CEO, Akio Toyoda, who had personal involvement in the GR Corolla project, the newcomer has been stripped of any unnecessary weight in order to adhere to the specifications set out by Toyoda himself.

To this end, the Morizo Edition loses the rear seats, rear speakers and rear window regulators, as well as the windscreen wiper, while at the same time gaining model specific 18-inch forged alloy wheels wrapped in Michelin Pilot Sport Cup 2 tyres and a smaller bootlid spoiler.

The place of the rear seats now being occupied by a strut brace, the Morizo Edition’s diet stretches to its roof made from carbon fibre and its panels and bonnet grafted out of aluminium.

In spite of using the already track-focused GR Corolla Circuit as a base, Toyota has made a series of additional changes to the Morizo Edition’s chassis and underneath its skin in order “to achieve control worthy of the GR badge”.

This includes the addition of 349 spot weld points and six metres more adhesive in order to make the structure as ridged as possible.

As evident by the air inlets on the flanks of the front bumper, Toyota has upgraded the GR Corolla Morizo Edition’s brakes by equipping it with a ventilated four-piston calliper set up at the front and two-piston at the rear.

Made out of the aluminium, the discs feature circumferences of 355 mm and 298 mm respectively.

Only available in two colours, Windchill Pearl and a new model bespoke hue called Matte Grey, the Morizo Edition’s interior, bar the removal of the mentioned items, retains the features and tech of the standard GR Corolla.

Unique to it though are suede and faux leather seats with red stitching, a suede-trimmed steering wheel, mesh seat inserts and red accents on the doors, around the air vents, on the steering wheel and gear lever.

Up front, the three-cylinder G16E-GTS 1.6-litre turbocharged engine also used in the GR Yaris continues to produce 220 kW, but with a 30 Nm increase in torque from 370 Nm to 400 Nm.

Paired as standard to the six-speed manual gearbox, whose ratios have been shortened, the Morizo Edition retains the Torsen limited-slip differential as well as the innovative GR-Four all-wheel-drive system. Surprisingly, no performance figures were released.

Going on sale later this year, only 200 GR Corolla Morizo Editions will be made with allocation, at present, seemingly destined for North America and nowhere else.

It is worth noting though that the standard GR Corolla is “under investigation” for South Africa, expect availability, if approved, to be in limited numbers and either from the end of the year or in early-2023.