I am quite fond of the Volvo brand. Their cars offer a high level of quality married to unique styling while offering the latest in engine technology and undisputable class leading safety. But one thing is for sure, they haven’t had an easy ride of it. Having gone through a few buyouts which started with Ford in 1999, where they weren’t really able to do their own thing and express themselves as Volvo, and were held back to 2010 when they were acquired by Geely Holding.

But at least under this new regime, they have been left to build cars their own way once again and the all new Volvo XC90 is the first offering from them.

The XC90 is not only showing the future of Volvo cars, but also the first step in a much needed product renewal plan. I know most of you won’t believe this, but the new XC90 is only the second generation of the car.

The previous model has been around since 2002, and that is an exceptionally long time when you are operating in the premium segment of the market that sees all new models every six to eight years.

Talking of the premium segment, Volvo want to see their new XC90 go after the German premium trio of BMW X5, Audi Q7 and Mercedes-Benz ML when launched locally in South Africa on August 1, and they want this car to spearhead their planned market growth from 3.5 to 5%.

I see no reason to doubt their confidence, there were 1 927 limited edition first models put up for sale on the internet.

They were all snapped up in 47 hours, including 18 of them in South Africa. Only 500 will be coming here this year and the order books are now already open at your local Volvo dealer.

The XC90 is just the start as I said. Within the next four years, Volvo will have replaced every car in their portfolio and the XC90 will then be the oldest car in the Volvo Cars showroom, and this statement speaks volumes about where Volvo is going as a car company. 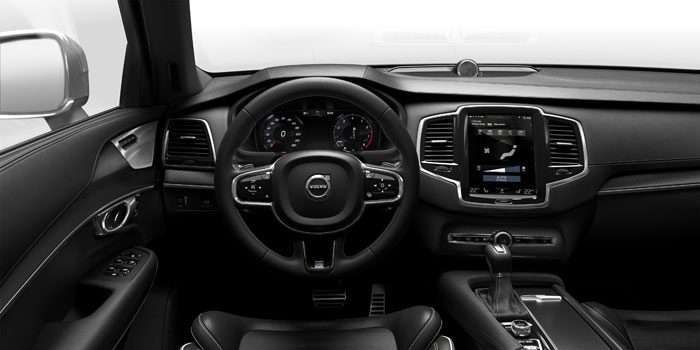 And to get a first taste of this new found enthusiasm, it was off to Spain to drive the XC90 at the car’s world media launch.

To start with, there will be three engine derivatives to choose from, all featuring efficient performance, courtesy of Volvo’s four-cylinder Drive-E engine programme in turbo petrol form and turbo diesel form along with a petrol married to a pair of electric motors to bring you what is said to be the most powerful hybrid SUV in the world at the mere 59g C02/km it is rated at.

South Africa is very much a power mad car nation and BMW and Merc, and even Audi, to some degree offer big power 3.0 litre and 4.0 litre plus turbocharged options in this segment, but no hybrid, so before you shoot down the idea of only four-cylinder engines powering a full size seven-seater SUV, let me tell you, they might not win every traffic light Grand Prix, but they do get the job done. This said, the diesel model will probably be the pick of the trio, due to the abundance of torque available and expected decent fuel consumption and price point when it arrives. Which, by the way, we were told should start at around the R800 000 mark.