Its the biggest baddest SUV on the market. One glance at the Infiniti QX80 will grab your attention. The reasons it does so will differ from person to person, some will love it some will hate it but nobody reading this will not have an opinion. Lets face it 14-spoke 22-inch forged aluminum-alloy wheels are hardly discreet.

But the really impressive part of the QX80 lies in the driving experience. Infiniti have taken a huge, powerful V8 powered SUV and made it as confidence inspiring to drive as a sedan.

The heart of this achievement is the advanced Hydraulic Body Motion Control (HBMC) system which uses a hydraulicly linked suspension system to compensate for body roll. In a vehicle of this size one expects the vehicle to pitch in and roll unnervingly in fast bends, but in the case of the QX80 this is largely, and reassuringly, not the case.

Apart from the fact that it is unlikely to be everyone’s cup of tea aesthetically, It is obviously not going to be a volume seller in this large premium end of the market, but if nothing else it showcases what Infiniti can do. To give an idea of the space inside the Infiniti QX80 offers seating for eight if necessary, although I would suggest only seven if they are adults. The nature of the space is even more significant than the space itself however. 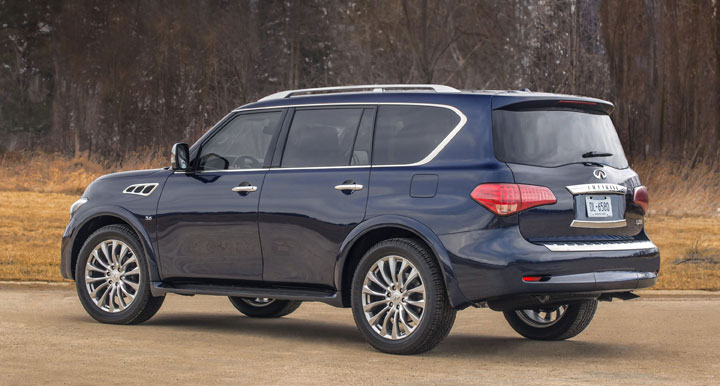 Among the QX80’s premium entertainment and technology features are an 8-inch WVGA color touch-screen display, Infiniti Controller for use with vehicle information systems and comfort and convenience features, and the 30GB Infiniti Hard Drive Navigation System with a 10GB Music Box.

The QX80’s Around View Monitor with Front and Rear Sonar System includes the Moving Object Detection (MOD) system. Around View Monitor utilizes four small super wide-angle cameras – mounted on the front, side and rear of the QX80 – to provide a virtual 360° view of objects around the vehicle, helping to maneuver it in tight spots. The MOD function helps enhance the driver’s situational awareness by providing visual and audible warnings (front or back range object detection) if the system detects large moving objects within the displayed image in situations such as when pulling out of a parking space.

The Bose Cabin Surround 15-speaker Premium Audio System includes two subwoofers and rear headliner-mounted 3rd row speakers that help ensure that sound quality is not compromised by obstructions such as luggage or cargo.

Other standard equipment includes a single in-dash CD/DVD player with MP3 playback, USB connection port for use with iPod® Interface or other compatible devices and Streaming Audio via Bluetooth.

The dual 7-inch color monitors mounted on the rear of the front headrests, two pairs of wireless headphones, wireless remote control, auxiliary input jacks and 120V power outlet are all standard on the QX80. The system allows playback of games or movies in the rear, while front occupants listen to audio all at the same time. The two 7-inch color monitors include an auto-bright system that adjusts for daytime, clouds/evening and night/tunnel lighting.

The QX80 uses Infiniti’s proven All-Mode AWD system with Auto, 4H and 4L modes available, along with hill decent control, lockable rear differential and a choice of 4 different on road and off road settings. The QX80’s suspension is an independent double-wishbone design front and rear, with Dual-Flow Pattwin tube shock absorbers and an automatic rear leveling system that seeks to maintain uniform ground clearance and departure angle, even when towing or carrying cargo, by automatically adjusting the air pressure in the system’s air bladders.

The 5.6-liter V8 engine provides 298kW and 560 Nm and is matched to a 7- speed automatic transmission. With all that power and traction the QX80 becomes not only an extremely capable offroader, but also an extremely effortless offroader. In fact driving in thick sand at least it took a little practice not to feed in too much power rather than too little, which is just the kind of problem you would rather have.

Fuel consumption did not appear too bad under the circumstances with a claimed 14.8 l/100km combined consumption looking a bit more like 17l/100km in reality.

There is one derivative QX80 Premium which has everything in it you could possibly want and is priced at R1 238 000.00