Buying tyres is not a particularly appealing undertaking, and one does not spring up on a Saturday morning and take the wife to browse the fitment centres before coffee at the mall. To all but a few, tyres are really rather mundane things. Tyre dealers do their best to make them exciting, usually displaying them on fancy rims to make them even vaguely appealing. But the reality is that the tyres on your car are what transmit all the performance your car is capable of – be it accelerating, braking or cornering to the reality of the road. Tyres have always been one of the most safety critical items on any motor vehicle.

More recently the fact we are destroying the planet has dawned on us, and so tyres have taken on another dimension in addition – their impact on the environment. Manufacturers are aware of this which is why tyre ranges are getting names which focus more on the environment than on performance or durability.

Bridgestone’s Ecopia is a case in point. Had you called your tyre ‘Eco’ anything a couple of years ago your mass market appeal would have been zero. It would also have been tantamount to fraud because tyres of old made their only contribution to the environment when fish had babies in them after they were irresponsibly discarded.

But that has changed drastically, partly because we have woken up a bit about what has a negative impact on the environment, but largely because we are always awake to what affects our pockets. Increasingly what makes environmental sense makes economic sense. Hense the term rolling resistance takes on meaning for the first time since we were rudely awoken in our school science classes.

Although safety remains paramount tyre manufacturers realise that one of the new fronteirs, and hence marketing opportunities, is environmental cost. Bridgestone are one of the world’s leading tyre builders, and are obviously at the cutting edge in this regard.

Their latest product the Ecopia EP200 takes very direct aim at those who take both cost and the environment into account. To prove their point they took us to their brand new tyre testing facility in Thailand.

The facility is primarily used by Bridgestone to ensure they meet vehicle manufacturers standards before production, and is capable of simulating and measuring a huge number of parameters. We were concerned with only a fraction of these, proper testing requires a great deal more time and highly specialised teams to ensure the repeatability of the test.

In our case Bridgestone wanted to make a few broad points about the Ecopia EP200. There were three cars, one fitted with Ecopias and the other two with competitor tyres, good brands whose names I do not mention because these tests would not meet with the strict requirements that would constitute a scientific evaluation.

Obviously one cannot produce a new tyre that scarifices any of its traditional strengths, so we were free to experience braking and cornering ability. The cars we used were hired 1.4-litre Corolla autos so we did not bother with acceleration.

The Ecopia performed very well both in wet braking conditions, and around the handling track but then so did the competitors. Where there appeared to be a remarkable distinction was when freewheeling, in other words examining the rolling resistence of the tyre.

Each time the Ecopia clad Corolla freewheeled the furthest which, if nothing else, should make it popular among students. Of course, it would take days of swapping wheels and cars and drivers to make emphatic statements about the rolling resistance, but it is important to us as consumers that manufacturers are being forced to compete in this regard, because less rolling resistance means less fuel.

To achieve this without sacrificing grip Bridgestone have developed what they call Nano ProTech technology. This essentially increases the density of silica molecules in the tyres compound. Nano ProTech reduces heat generation and energy losses while driving, giving lower rolling resistance.

“In tests carried out at the Gerotek testing facilities in Pretoria, the Ecopia EP200’s rolling resistance was 78 metres better than its main competitor,” said Bridgestone’s Jan Maritz. “In the same tests, a 195/65R15 Ecopia returned 4.3 percent lower fuel consumption than its non-Ecopia equivalent,” he added.

For those who do in fact go tyre shopping it might also be of interest that the Ecopia has high-stiffness shoulder tread blocks with a square profile instead of the rounder profile of conventional tyres. This improves directional stability while reducing rolling resistance. Bridgestone says that the square profile shoulders also provide greater resistance against irregular wear.

The centre tread blocks are moulded in the shape of a reversed Z, providing more stable road contact. The blocks include a high angle lug groove that enhances wet weather roadholding.

The reversed Z design has allowed Bridgestone’s designers to widen the three straight grooves in the tread, significantly reducing the risk of aquaplaning when driving on wet roads. 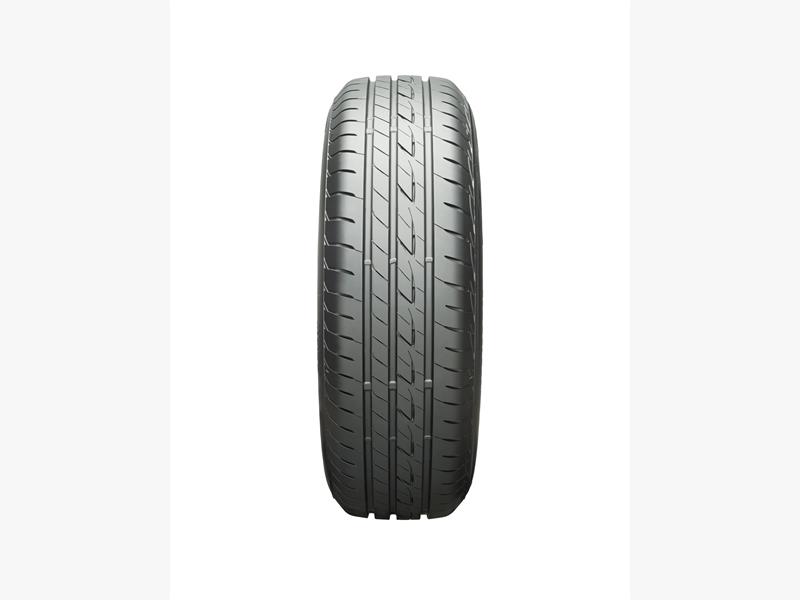 The Ecopia EP200 is an asymmetrical tyre which is optimised to improve straight-line stability by absorbing forces imposed by uneven and undulating roads. The sidewalls are uniquely shaped on each side of the tyre and this means that, as with other asymmetrical tyres, the Ecopia EP200 should be mounted so that that “outside” marking on the tyre’s sidewall faces away from the vehicle.

Bridgestone says that the tyre is aimed at upper B-segment and C-segment passenger car market, which typically includes vehicles like the Ford Fiesta and Focus, Toyota Corolla, VW Golf and Mercedes-Benz C-Class. The Ecopia EP200 covers the majority of common tyre sizes for these vehicle segments, from 175/65R14 to 225/50R17.

“The Ecopia EP200 is aimed at the driver who wants a tyre that gives lower fuel consumption and therefore lower emissions, but without compromising on ride comfort and roadholding,” Maritz said. “The Ecopia EP200 builds on the reputation of the previous Ecopia as the premier eco-friendly tyre available in South Africa.”

For those of you who are unconvinced by the technical market speak, there is one easy to understand benefit. The new Ecopia is covered by Bridgestone’s Tyre Damage Guarantee under which a motorist only pays for the tread which has already been used if a tyre is damaged beyond repair and must be replaced. Depending when this happens in a tyre’s life this can prove to be a huge saving.

Tyre technology is advancing all the time, so the next time you have to buy tyres take heart from the fact that you can at least chose to buy something that was better than what you had before.