Biturbo is pick of Panameras

When we were over in Germany a few months ago for the world launch of the updated Porsche Panamera we got to blast around in the seriously fast turbo and then in the uncompromising GTS. We even spent some time saving fuel in the new S E-Hybrid, the world’s first plug-in hybrid in its class. The one Panamera we did not get to sample was the S, or 4S, with its entirely new 3.0 litre V6 engine with biturbo charging.

But this was quickly taken care of when we were offered the first 4S to road test. Following the world wide mantra of ‘more performance and efficiency by downsizing’ this new V6 biturbo replaces the previous 4.8 litre V8 engine. To put this into perspective the claimed combined number is now 8.9 litres/100 kilometres and, although we didn’t quite get there, we did average a very impressive 10.6 litres/100 kilometres for the duration of the test. Some of this is certainly thanks to the extended start-stop function that now deactivates the engine earlier, while coasting to a stop. This once again saves more fuel, along with a coasting function in which the clutches open in response to overrun, the engine idles and the car coasts freely.

If that is impressive what will blow you away are the tested performance figures. Making use of the simple to activate Launch Control function of the seven-speed Porsche Doppelkupplung gearbox, the Panamera 4S blasted to 100 km/h in a mere 4.61 seconds, hit the quarter mile in 12.93 seconds, and crossed the one kilometre mark at 225.90 km/h while going on to record a true top speed of 293.28 km/h. Not shabby for a full house executive car that weighs in at 1 870 kilograms, and basically proving that fast does not always have to come at the expense of fuel consumption. Talking of full house, the Panamera 4S interior unites just enough sports appeal and daily comfort with four bucket seats and variable cargo space for a high level of everyday utility. The average Panamera will be used on a daily basis and the interior comfort and space will be an important facet in the purchase decision, and here the 4S scores top marks once again.

There are a host of new bi-colour combinations for the interior to go with extended standard features such as the multifunction steering wheel that now comes in every Panamera, and the power lift boot lid can be opened and closed electrically at the press of a button. Of course, as is the norm, you can also dig into the optional extras bin and kit your Panamera out to your exact specification and requirement. To go with a full house of expected safety and convenience items you also get an extended line-up of assistance systems such as the optimised adaptive cruise control system. This actively intervenes in the braking process in hazardous situations, along with camera-based traffic sign detection and lane departure warning, that offers greater convenience in open road and highway travel.

Bi-xenon headlights are now also standard for all new Panamera models. As an alternative Porsche is offering LED headlights as an option for the first time.

This package consists of the Porsche Dynamic Light System Plus (PDLS Plus) with dipped and main beam headlights as well as an auxiliary main beam and four-point daytime running lights, in LED technology, that offer a host of safety benefits.

As a technical package the Panamera is almost impossible to beat, and that probably explains why those that own one love them so much. They offer all the luxury and status you could want while also delivering on a sporty promise when required.

But there are those that can’t get over the styling of the Panamera, and this is the most controversial point about this car. You either love it or hate it. 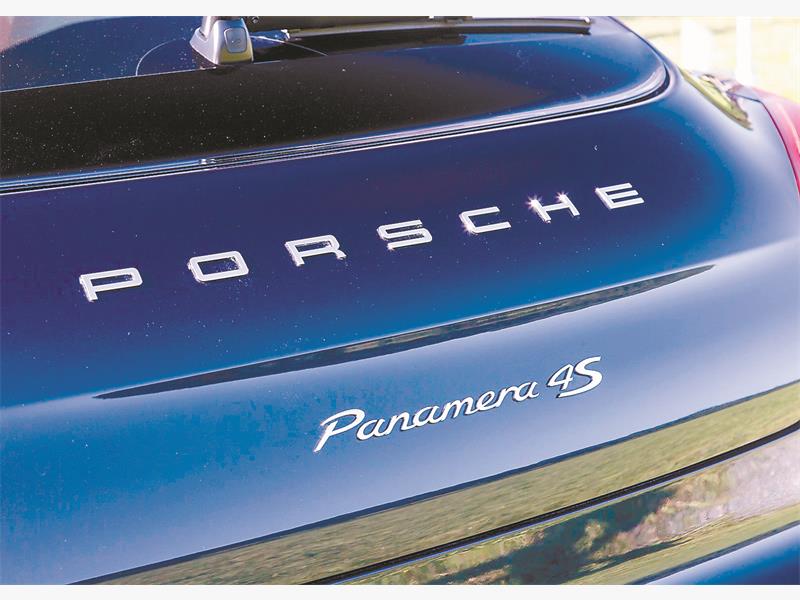 Is it my favourite looking Porsche? No, but it in the right colour and wheel combo it is a car that grows on you in a mature kind of way.

For those who don’t live in our automotive world let me tell you what has been changed. There is tighter and more prominent line work at the front end, and this is especially apparent in the larger air intakes and the distinctive transition to the headlights.

In side profile the new, more swept-back windscreen creates an even more extended silhouette. When viewed from the back, the new generation Panamera is primarily made out by its new boot lid.

The widened rear windscreen emphasises horizontal aspects of the Gran Turismo and therefore its sporty character. This effect, which gives the Panamera the visual appearance of a lower stance on the road, is reinforced by integrating the licence plate bracket lower in the bumper.

The rear body section was also redesigned. It features a wider spoiler and a tighter transition to the rear lights, similar to the visual transition of the headlights at the front of the car.

So there you have it, the new Porsche Panamera 4S is everything you expect of – and then some more when you hit road with enthusiasm thanks to the awesome new biturbo engine. Pricing starts at R1 221 000 with a three-year DrivePlan and R1 271 000 with a five-year DrivePlan.