The new lightweight premium compact model combines its dynamic performance with excellent efficiency. The long-stroke 2.0 TFSI in the Audi S3 has been developed from scratch. The only thing it has in common with its predecessor, which was named Engine of the Year five times in a row between 2005 and 2009, is its displacement of 1984cc. The four-cylinder unit delivers a constant 380 Nm of torque to the crankshaft between 1800 and 5500rpm, and rated power at 5500rpm is 206 kW and the engine redlines at 6800 rpm.

The S3 3-Door delivers impressive performance and will be offered in South Africa with both six-speed manual or seven-speed S tronic transmissions. The sprint from 0-100 km/h is completed in 4.8 seconds when equipped with the S tronic and 5.2 seconds with the manual transmission it is claimed, while both engines are electronically governed to a top speed of 250km/h.

The S tronic is said to consume on average just 6.9 litres of fuel per 100 kilometres and the manual 7.0 litres, an improvement of 1.5 litres compared with the previous generation. This corresponds to carbon emissions of 159 grams per kilometre.

The 2.0 TFSI also boasts ground-breaking solutions in many fields of technology. One of these innovations is the additional use of indirect injection.

It supplements the FSI gasoline direct injection at part load to reduce consumption and particulate emissions. FSI injection, which works at pressures up to 200 bar, is used when starting and at higher loads.

Despite its complexity and the high performance, the new 2.0 TFSI engine weighs just 148 kilograms, which is more than five kilograms less than the previous engine. Quattro permanent all-wheel drive is an integral component of the powertrain.

It gives the new top model in the A3 series a decisive edge over its two-wheel-drive competitors. The Audi S3 can accelerate earlier and more safely when exiting a corner, and it remains dynamic and stable under all conditions, particularly in wet circumstances.

The heart of the quattro drive system is an electronically controlled and hydraulically actuated multi-plate clutch. In the interest of balance axle load distribution, it is located at the end of the prop shaft, in front of the rear axle differential.

During normal driving, the clutch sends most of the engine’s power to the front wheels. If traction decreases, the clutch can transfer torque seamlessly to the rear axle in just a few milliseconds.

The new Audi S3 offers the dynamic driving characteristics of a sports car. It responds to steering input precisely and spontaneously, and takes all types of corners at high speed and with little body movement, and handling is precise, safe and virtually neutral.

One reason for this performance is the finely balanced distribution of the axle loads. The front axle has been shifted forward 52 millimetres compared with the previous model.

Another innovation in the Audi S3 is the progressive steering system. The steering rack is geared in such a way that the ratio varies.

It is somewhat more indirect around the centre and very direct when steered sharply. For the driver, this technology combines a pleasantly smooth character when driving straight ahead with highly spontaneous response in tight corners.

Audi drive select comes as standard in the new Audi S3. It incorporates the characteristics of the electronic accelerator, the boost of the progressive steering and the shift points of the optional S tronic. The driver determines with the push of a button whether these systems operate in comfort, auto, dynamic, efficiency or individual mode.

The athletic design of the exterior carries over into the interior. A distinct arch encircles the instrument panel which appears to float on the centre console.

Large, round air vents, the elegant control panel for the air conditioning and the decorative inlays in matt brushed aluminium or a black 3D look provide exquisite accents. The controls are clear and intuitive, as in every Audi.

The quality is unsurpassed and there is a generous amount of room. Luggage capacity is 365 litres, which can be increased to 1100 litres by folding down the rear seats. 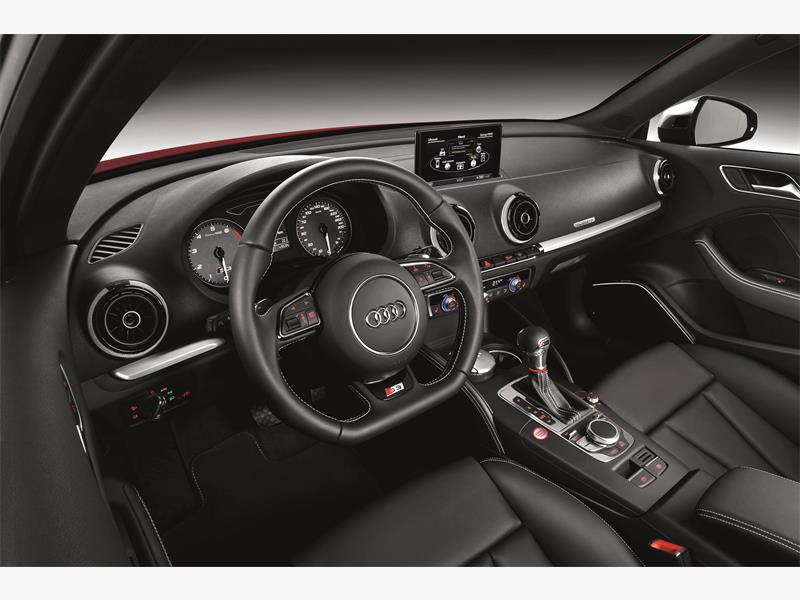 The driver information system with rest recommendation is standard, and the power-retractable on-board monitor powers up to display a special S3 screen when the ignition is turned.

The optional leather multifunction sport steering wheel has been redesigned with the flat-bottomed rim. In models equipped with S tronic, the steering wheel incorporates aluminium-look shift paddles, and the pedals and footrest are made of brushed aluminium. 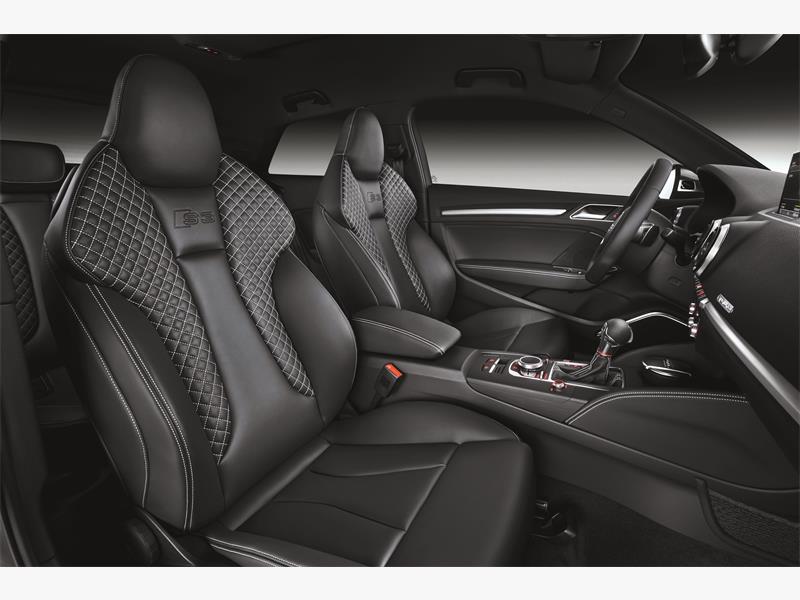